Tanguy Ndombele returns to Lyon, who he left to join Spurs for a club-record fee in 2019, on loan until the end of the season; Lyon have paid a £1.2m loan fee and have the option to buy Ndombele in the summer; Spurs winger Bryan Gil joins Valencia on loan until end of season

Tanguy Ndombele has returned to Lyon on loan to bring an end to his disappointing spell at Tottenham.

Ndombele - who became Spurs' record signing when he joined from Lyon for £63m in July 2019 - will stay in France until the end of the season.

Lyon have paid a £1.2m loan fee and retain the option to make the deal permanent in the summer for a reported £54m. Ndombele will help to replace Bruno Guimaraes, who joined Newcastle for £40m on Sunday.

Tottenham released a brief, 46-word statement to announce Ndombele's exit, which featured none of the usual pleasantries handed out by a club when a player leaves.

"Tanguy Ndombele has joined Ligue 1 side Olympique Lyonnais on loan until the end of the season," said Spurs.

"The central midfielder returns to the club from which he joined us in July 2019. He has made 91 appearances for us in all competitions to date, scoring 10 goals."

The third of those appearances came against Morecambe in the FA Cup earlier this month and saw him jeered by his own supporters when he was substituted. The 25-year-old did not play for the club again following the incident.

Despite his struggles at Spurs, Paris Saint-Germain, Everton and Valencia all tried to sign Ndombele this month.

Tottenham winger Bryan Gil has also departed the club this month after signing for Valencia on loan until the end of the season.

The 20-year-old joined last summer from Sevilla, in a swap-plus-cash deal which saw Erik Lamela join the Spanish side with Spurs paying the Andalusian side £21.6m for Gil, according to Sky in Italy.

'Spurs back Conte over Ndombele exit'

"It was a partnership that was once so full of promise. Tottenham fans rejoiced on July 2, 2019 as a club-record signing was made.

"France international Tanguy Ndombele was to be the answer in a midfield with a large Mousa Dembele-shaped hole. It was an exciting signing and offered fresh hope that Daniel Levy was ready for a rebuild.

"His first touch was an assist in a friendly, closely followed by his first Premier League goal on debut against Aston Villa. It was as good as it got, despite sporadic glimpses of his undoubted talent.

"What followed was not progress but disappointment and fast forward two-and-a-half years - and four managers (five if we include interim Ryan Mason) - and Ndombele will depart without fulfilling his promise. 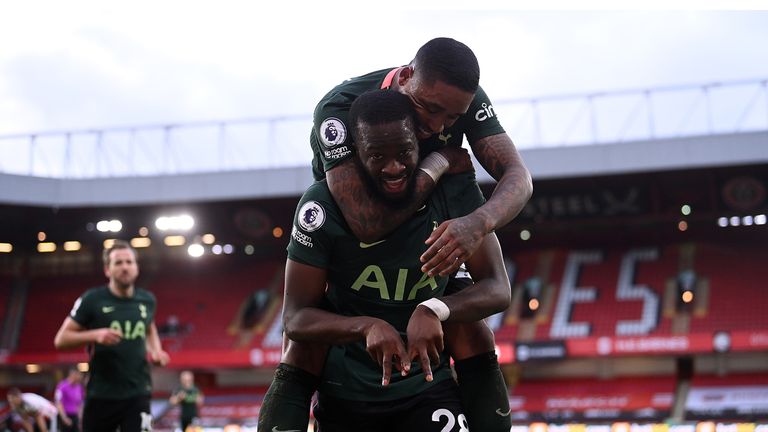 "A particular low was being left out of the League Cup final by Mason last season, while Jose Mourinho was publicly critical after a game at Burnley, questioning his commitment to being a team player. Mourinho worked hard with him, but any step forward was followed by two back.

"Tottenham have got their way with this deal. They have opted to back Antonio Conte over the player. Conte was not keen on the PSG players potentially being included in a swap deal, but Lyon have made their move.

"Crucially for Spurs fans, it opened the door to Rodrigo Bentancur in the hope of freshening the squad for the latter stages of the season.

"A January transfer window is never perfect but Conte will be satisfied progress has been made with Dejan Kulusevski also arriving. The recent business will calm the waters for now but the summer window will define the Conte era in north London."