Plus: Chelsea progressing in talks over move for Juventus' Matthijs de Ligt and Man City's Nathan Ake; Arsenal want to keep William Saliba at the club next season and hope to tie him down to new deal; Celtic close to finalising £6.5m deal to sign Jota on a four-year contract

The Athletic's Roshane Thomas reviews all the big talking points from the back pages.

Barcelona are ready to make an offer worth up to £60m for Raphinha in an effort to beat Chelsea to the signing of the Leeds United forward.

Brennan Johnson has given Nottingham Forest a huge boost by agreeing a new four-year contract at the City Ground.

The Rugby Football Union has confirmed ambitious plans to turn the women's Premier 15 league professional within a decade at a cost of more than £200m.

Chelsea's negotiations with Juventus over a move for Matthijs de Ligt are progressing with talks continuing regarding a return to Stamford Bridge for Nathan Ake.

Chelsea's new owners have commissioned an investigation into accusations of a toxic culture of bullying within their marketing team after it emerged the former head of the club's television channel took his own life.

Wimbledon is facing criticism over Centre Court roof bungles, having kept it closed during dry weather for Katie Boulter's win but then kept it open for Rafael Nadal's match only for light rain to fall.

Bruno Fernandes has attempted to end speculation surrounding Cristiano Ronaldo's future by claiming the Portuguese is set to stay.

Manchester City will tell rivals Chelsea to forget about re-signing centre-back Nathan Ake on the cheap this summer.

West Ham's move for Villarreal forward Arnaut Danjuma is on the brink of collapse over personal terms, meaning the club is likely to shift focus to bringing Jesse Lingard back to the London Stadium.

Goalkeeper Sergio Romero is interested in a return to Manchester United despite the somewhat acrimonious end to his previous spell at Old Trafford - he becomes a free agent on Friday after a season with Venezia.

Birmingham City manager Lee Bowyer is seeking assurances over his future as the protracted takeover of Birmingham has left him with 12 players, no assistant and poor training facilities just weeks before the start of the Championship season.

West Bromwich Albion owner Guochuan Lai has admitted he borrowed £5m from the club more than a year ago and has still not paid it back.

Tottenham's increased offer for Richarlison was enough to put Chelsea off the Everton striker, with the £60m asking price too expensive for them. 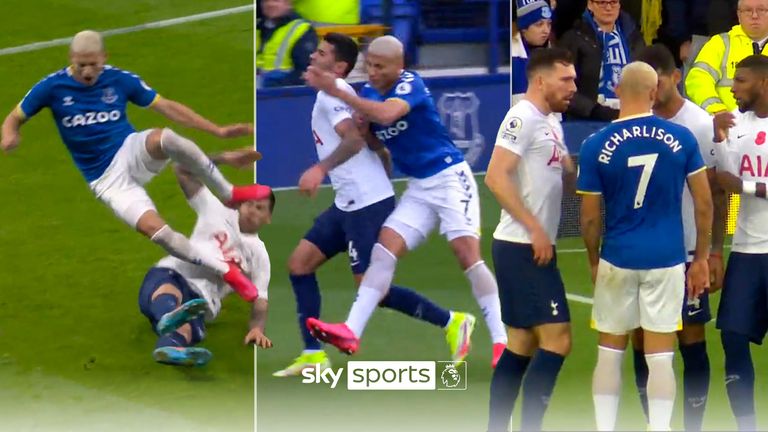 As Richarlison's Tottenham move edges closer, we look back at the Brazilian's clashes last season with his soon-to-be team-mate Cristian Romero.

Paris Saint-Germain have paid around £35m to sign Porto midfielder Vitinha, who made little impact during a spell with Wolves.

Cheikhou Kouyate will walk away from Crystal Palace on Friday despite being keen to stay, with the club not willing to offer him the two-year deal he desired.

England Boxing has been rocked by sexual assault claims with a male staff member well known to some of the sport's biggest stars having been sacked for gross misconduct.

Juventus have turned their attentions to Roberto Firmino as part of any swap deal with Liverpool for Adrien Rabiot, having previously wanted to include Naby Keita in the transfer.

Arsenal are intending to keep William Saliba at the club next season and are hoping to tie the defender down to a new contract.

Gabriel Magalhaes remains a target for Juventus but it remains unlikely that Arsenal will sell the defender this summer.

Arsenal are stepping up their efforts to sign "the next Mesut Ozil" with reports in Turkey claiming they have opened talks with Fenerbahce over a deal for teenage midfielder Arda Guler.

Barcelona have boosted their transfer kitty for the summer by selling off 10 per cent of their LaLiga TV rights to a global investment firm for more than £200m.

Question marks remain over Hector Bellerin's future at Arsenal after he returned to training with the Premier League club on Thursday. Atletico Madrid and AS Roma are interested in Bellerin, but he would prefer a return to Real Betis after a successful 2021/22 loan spell.

Kenny Miller reckons Rangers could be forced to sell Alfredo Morelos for a lowball offer if they can't get the Colombian to commit to a new deal.

In-demand Stephen Kelly looks set to leave Rangers before the close of the window despite returning to training at Auchehowie.

Croatian striker Antonio Colak has been labelled as 'easily replaceable' as a move to Rangers edges closer.

New Aberdeen signing Bojan Miovski has been backed to eventually play in the Premier League by Giovanni Costantino, his former manager at MTK Budapest.

Neil Lennon has tapped into his SPFL knowledge again by adding former Rangers and Hibs winger Brandon Barker to his Omonia Nicosia squad.