Arveladze was appointed by Hull in January and leaves the club in 20th place in the Championship; Andy Dawson will take interim charge of the Tigers; watch Hull City vs Luton Town on Sky Sports Football this evening from 7.30pm; kick-off 8pm

Hull have sacked manager Shota Arveladze after just eight months in charge of the Championship club.

Arveladze was hired in January and managed to guide the Tigers to 19th in the Championship table last season. But with the club in 20th place going into the September international break, Hull chairman Acun Ilıcalı has made a change.

The decision to sack Arveladze comes on the same day the club host Luton in their next Championship game, live on Sky Sports.

Assistant manager Peter van der Veen also departs the club so Andy Dawson has been appointed on an interim basis for the time being.

Ilıcalı said in a statement: "During the international break, we had a number of meetings with Shota to discuss the direction of the team and the future of the club. As these meetings went on, it became clear our views weren't aligned so we have made the decision to part ways.

"Shota and Peter leave with our thanks, greatest respect and fond wishes for the future. Our focus is now supporting Andy and the squad and finding the best possible candidate to drive this club forward."

Arveladze's departure is the third Championship sacking in the past 16 days. Huddersfield manager Danny Schofield was dismissed on September 14 and was replaced by Mark Fotheringham on Wednesday. 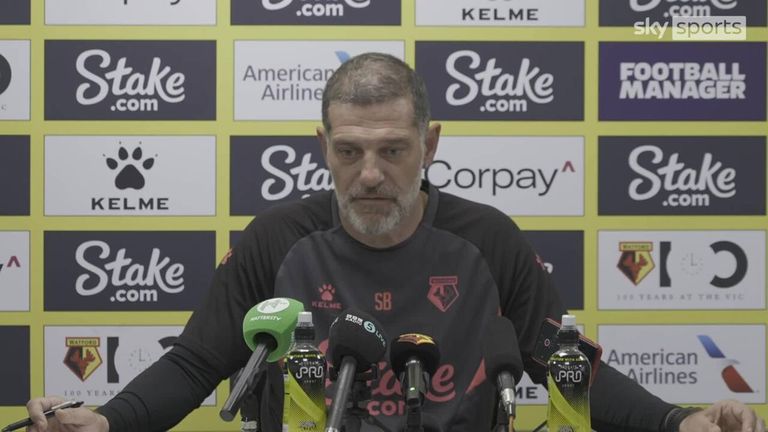 New Watford boss Slaven Bilic has told the media that he is not fearful of Watford's manager history.

At Watford, new manager Slaven Bilic was presented as the club's new manager and despite several questions about his employers' recent hiring history, the Croatian boss brushed off this talk.

"I'm the manager and I've been asked that question many times," said Bilic when asked whether he felt he would be given time at Watford. "We would love to be given time and time is crucial but it is very common for the clubs to change managers.

"They definitely don't want to sack me. They want me to do good."

Bilic's first game as Watford manager is away at Stoke City on Sunday, live on Sky Sports Football with kick-off at 12 noon.