Chelsea announced on Tuesday that Sam Kerr had put pen to paper on a two-year contract extension; "Her goalscoring record is nothing short of remarkable", said Emma Hayes 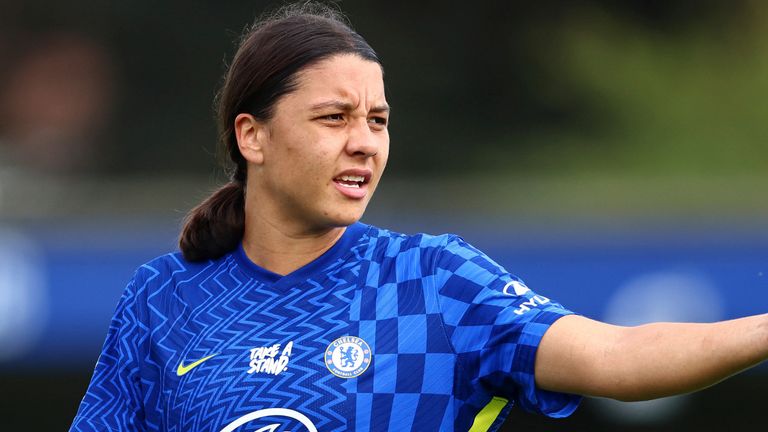 Chelsea Women boss Emma Hayes has praised striker Sam Kerr for proving the doubters wrong and becoming one of the world's best.

Chelsea boss Emma Hayes has praised Sam Kerr for her goalscoring and being the "ultimate team player" after the Australia forward signed a new deal with the club this week.

Kerr, who has netted 39 times for Chelsea since joining the team midway through the 2019-20 season, has put pen to paper on a two-year contract extension running to the summer of 2024.

Speaking at a press conference ahead of Thursday's Champions League home clash with Servette, Hayes said: "Sam is one of the best strikers, if not the best striker, in the world.

"Watching her develop in the last 18 months has been amazing. There were lots of people who wondered how she would cope playing in European football. Not only has she adapted to that, but she's excelled.

"Her goalscoring record is nothing short of remarkable, but then you look at her assists column, which shows the selfless behaviour. She wants to score goals, of course, but she is all about the team. She is the ultimate team player."

Hayes added: "I think the fact she's recommitted to the club is an amazing achievement on our part. She chose us in the first instance, but to choose [Chelsea again the] second time around, you know you are doing the right things in the background.

"I think she will go on to score record numbers of goals for this team, and I think for us to compete, to go even further, her learnings will be critical. She is such a big-game player - but not a big-timer. She is an amazing team-mate, and a great person to be around.

"Make no mistake, Sam wants to be on the winning team and competing for the top trophies, otherwise she wouldn't stay here. We expect her to continue to drive those standards and be recognised, as she rightly should be, as one of the best players in the world."

Hayes - whose side finished as Champions League runners-up last season, as well as retaining the Women's Super League title and the League Cup - are currently top of Champions League Group A with seven points from three games. Their last fixture saw them beat Servette 7-0 in Geneva, scoring six times in the first half.

"I think they [Servette] will have learned a lot," Hayes said. "They sort of sat off us a little bit in the first half. In the second, I think they pressed us higher and harder, and I think they'll do that again this week. I expect them to make it more difficult for us.

"What I'm looking for from the [Chelsea] team is, regardless of the result, the same consistency in the performance."

Harder and Nouwen out until FA Cup final in December

Pernille Harder and Aniek Nouwen remain sidelined by muscle injuries, with Hayes saying she expects the pair to be fit for the FA Cup final against Arsenal on December 5, but not for anything earlier.

Arsenal are the other WSL team in this season's inaugural Champions League group stage, and, on Tuesday, their boss Jonas Eidevall described his side's schedule as "almost inhuman" after Leah Williamson suffered a hamstring problem that could rule her out until 2022.

Asked about Eidevall's comments, Hayes said: "I can't speak on Jonas' behalf. All I will say is you have a squad for a reason, and I have to utilise the squad here to make sure I keep everyone healthy.

"We have a hell of a schedule coming up. Coming back after the international break, we play the FA Cup final on the Sunday, Juventus on the Wednesday, and Reading on the Saturday morning. It is what it is, and I trust the group of players we've got.

"The scheduling... I think for me it's less about that and more about a bigger Christmas break.

"I think that's the bigger problem, getting that right, after Olympics and getting the right recovery period, or a Christmas period where you can kind of get fresh again, I still think we have a little bit of work to do there. But you still have to deal with it."