Africa Cup of Nations: Yaya Toure says it is amazing to win a tournament with Ivory Coast

Yaya Toure says winning the Africa Cup of Nations with Ivory Coast is one of his greatest achievements in football.

The Manchester City man has won two Premier Leagues and an FA Cup in England, having bagged a pair of La Liga titles and a Champions League during his Barcelona days.

However, after Ivory Coast had beaten Ghana 9-8 in a dramatic penalty shoot-out, Toure said that winning an event with his country was a different feeling.

It was the sixth time that the 31-year-old had played in the event and he suffered defeat in the finals of 2006 and 2012.

"I cannot express my happiness," Toure told the tournament website.

"When you win a title with your club it is amazing but, with the country, it is unbelievable.

"I have been dreaming of this moment throughout my eight years in the national team. I have been waiting for this moment. We failed twice in 2006 and 2012.

"I'm very delighted and I want to thank all who have inspired and motivated us.

"Today was superb and we should congratulate our goalkeeper Boubacar Barry, because he has had some very difficult moments, particularly back home, where he has been criticised a lot.

"Today, he is the one who brings us the trophy." 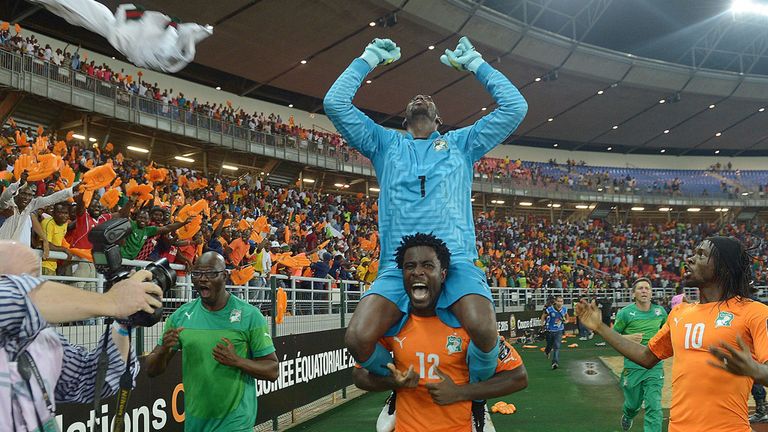 Today was superb and we should congratulate our goalkeeper Boubacar Barry, because he has had some very difficult moments, particularly back home, where he has been criticised a lot.

Ivory Coast head coach Herve Renard was triumphant at the Africa Cup of Nations for the second time, having defeated Ivory Coast on penalties when he was in charge of Zambia in 2012.

"I'm lucky to win twice on penalties," he said.

"I am very happy for this team. The 'never give up' spirit in the team was the most important factor. This victory is for all Ivorians."

Ghana coach Avram Grant was pleased with his side, despite their defeat.

"I'm so proud of my team and they always make me happy," he said.

"To reach the final is a big achievement. The players have shown a lot of good things at this tournament.

"We were the better side against a team that has some of the best players around. It was down to penalties and the opponent scored one more than us.

"Every Ghanaian can be proud of this team."