Ticketless supporters gained entry to Wembley ahead of last Sunday's Euro 2020 final; clashes with stewards, police and fellow fans were reported; the FA: "A key emphasis of the findings will be to ensure that lessons are learned and such disgraceful scenes are never able to be repeated"

The FA has commissioned an independent review as it seeks to avoid a repeat of the "disgraceful scenes" at Wembley Stadium for the Euro 2020 final.

The match between England - playing in front of a home crowd and in their first major final for 55 years - and Italy was marred by ticketless supporters gaining entry to the stadium and clashing with stewards, police and fellow fans.

The Metropolitan Police have issued an appeal for help identifying 10 men who they believe were involved with violence and disorder at England's national stadium. 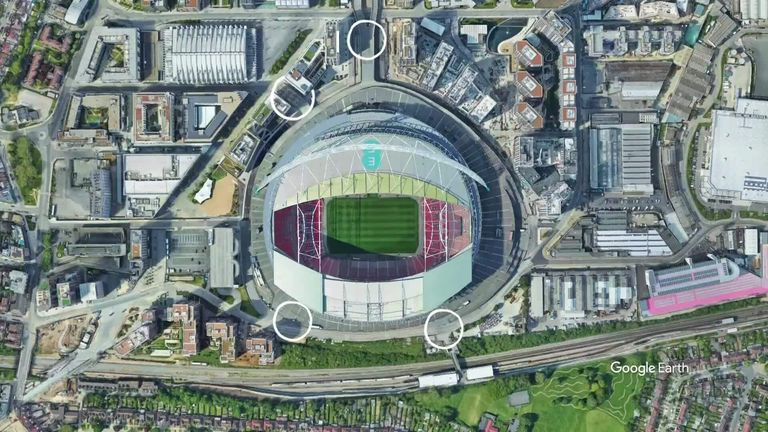 UEFA also opened a disciplinary investigation into events surrounding the match - which was won on penalties by Italy after a 1-1 draw - and the FA confirmed a review will take place after MPs last week demanded answers as well.

An FA spokesperson said: "We are determined to fully understand what happened outside and then inside Wembley Stadium at the UEFA EURO 2020 Final on Sunday 11 July 2021.

"We informed DCMS at the weekend that an independent review led by Baroness Casey of Blackstock has been commissioned to report on the facts and circumstances involved. It will speak to all parties concerned and include external experts.

"A key emphasis of the findings will be to ensure that lessons are learned and such disgraceful scenes are never able to be repeated. We continue to work with the relevant authorities in support of their efforts to identify those responsible and hold them to account."

FA chief executive Mark Bullingham has also responded to the Government calls for an explanation into the scenes at Wembley.

In a letter to Julian Knight MP, the chair of the Digital, Culture, Media and Sport Committee, Bullingham said the actions of thousands of England supporters before and during the match with Italy "brought shame to the whole country".

Bullingham wrote: "The scenes around Wembley Stadium at the UEFA Euro 2020 Final on Sunday, July 11 were both shocking and appalling.

"We were faced with thousands of yobs outside the stadium, many of whom were drunk or intoxicated in other ways. Subsequently large numbers also tried, often violently, to force their way into Wembley from public areas.

"Their behaviour was unacceptable, dangerous, often criminal and showed total disregard for the law and other people. No police officer, steward, security staff or genuine fan should be subjected to this type of sustained public disorder."

Bullingham continued: "This was disgraceful behaviour which brought shame to the whole country at a time when our incredible men's England team had done so much to lift the mood of the nation during one of the most difficult times in our history.

"At a time when we should be celebrating the achievements of the team, we are focused on how our stadium team of police, security and stewards had to battle the horrendous actions of thousands of lawless yobs during a six-hour siege - something no stadium is set up to deal with.

"We are determined to get to the bottom of what happened both outside and then inside Wembley and are aware that everyone will need to learn the lessons of the day and instigate changes for the future where needed.

"To achieve this, we have commissioned an independent review focused on learning lessons to prevent this from ever taking place again. This will be led by Baroness Casey of Blackstock and we have informed both Number 10 and the Secretary of State as well as you.

"The review will speak to the relevant parties such as the Police, the Greater London Authority, the Safety Advisory Group and those involved in tournament delivery including the Department for Digital, Culture, Media and Sport. It will also reflect on fan experience and include evidence from supporters."

He concluded: "Meanwhile, we continue to work with the relevant authorities in support of their efforts to identify those responsible and hold them to account.

"I am confident that the independent review will provide all of us with comprehensive answers to the questions that you and your colleagues have posed, as well as many of our own that we have. We will share the findings with you once it is completed."

Last week, Knight wrote a letter to Bullingham to demand an explanation for the "shocking" scenes at Wembley.

"The sheer number of ticketless people breaching the temporary, and arguably insufficient, barriers and physically attacking stewards and police to force their way into the match was appalling," wrote Knight.

"Reports across social media of unsafe numbers in the stalls and terrified children being intimidated by the intruders did not line up with the stadium's statement that a small number of people had successfully entered the stadium without a ticket.

"In the FA's statement on the matter, it stated that 'security and stewarding numbers for the Euro 2020 final exceeded the requirements for the match and were greater than any other previous event' at the venue. Clearly the numbers were still insufficient."

Knight went on to ask a series of questions regarding the FA's plans regarding crowd control ahead of the game.

Speaking to The Sun, Harry Maguire - who was one of only two England players to score his penalty in the shootout - said his father was left with suspected broken ribs after being caught in a "stampede" caused by ticketless fans at the game.

The defender went on to say: "We have to make sure it does not happen again."

The FA was hit with four charges by UEFA following the final. They relate to the invasion of the field by a spectator, throwing of objects by supporters, disturbances during the Italian anthem and the lighting of fireworks.