Alex Morgan admits she will take one or two things back to the US from watching Jose Mourinho's team surge up the Premier League table; the 31-year-old made five WSL appearances, scoring twice as she regains match fitness after giving birth in May

Alex Morgan says she has learnt a lot from watching Jose Mourinho's side as she gets set to leave Tottenham Women and return to the US in the New Year.

The 31-year-old, who has 170 caps for the USA and is a two-time Women's World Cup winner, joined Spurs from Orlando Pride in September.

Using her time to regain match fitness after giving birth in May, the forward made five appearances, scoring twice in the Women's Super League (WSL).

Speaking exclusively to The Women's Football Show, Morgan admits she will take one or two things back to the US from watching Mourinho's team surge up the Premier League table.

"They've got off to a fairly good start and Jose (Mourinho) has done a great job to get this team to the top," Morgan said.

Morgan was one of a number of the USA's 2019 World Cup-winning squad to move to the WSL at the start of the season, with Sam Mewis and Rose Lavelle joining Manchester City and Tobin Heath and Christen Press moving to Manchester United. 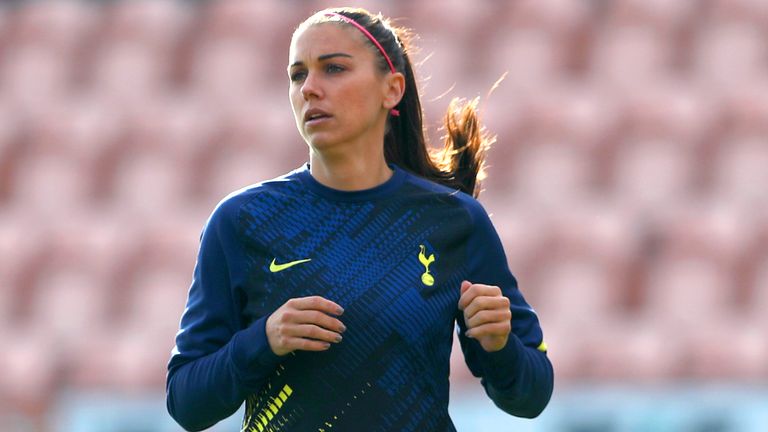 Two-time World Cup winner Alex Morgan says the WSL is one of the best leagues in the world, but could get even better if restrictions on overseas players were relaxed

When Morgan's move to Tottenham was completed just before the Transfer Deadline in autumn it capped off an extraordinary window for women's football in England.

But with Morgan on her way back to Orlando after playing just five games for Spurs, what has the impact of the summer signing spree from the States been on the WSL?

Our reporter Anton Toloui analyses the situation ahead of the winter Transfer Window opening on January 1.