In an exclusive interview with Sky Sports' Thierry Henry, Alexandre Lacazette lifts the lid on why he chose Arsenal and says he wants to score the goals to deliver trophies for Arsene Wenger's side.

The Gunners forked out a club-record fee, which could rise to £52m, to bring the France international to the Emirates from Lyon this summer.

But it immediately looked like money well spent as he endeared himself to Gunners fans just two minutes into his debut, opening the scoring against Leicester with the first goal of the 2017/18 Premier League season.

And Lacazette, having been handed the goalscoring responsibilities, and the No. 9 shirt, has vowed to continue finding the back of the net to help bring further silverware to the Emirates.

"I'm going to try to score lots of goals. No, I am going to score," he told Gunners legend Henry ahead of the Super Sunday showdown between Arsenal and Liverpool, live on Sky Sports Premier League.

"I'm going to score goals at key times in the games where the team may have struggled in previous years.

"This season I'm going to help this team win them and that's what Arsenal have to do: win games and trophies.

"As a No. 9, I have to be there to score goals, but that isn't the only thing. I also participate in the build-up and help my team-mates, but, above all, it's about scoring goals.

"There are games where the striker will be useful for the team in terms of creating space and being involved in the game, without necessarily scoring, but he'll have played an important role for the team.

"But, of course, over the course of a season I have to score goals as that's what statistics reflect."

Lacazette sent clubs around Europe scrambling for his signature with 37 goals in what proved to be his final season at Lyon.

The Gunners fought off strong interest from Atletico Madrid to get their man, and Lacazette has shed light on what convinced him to move to north London.

"There were discussions that didn't go all the way and then Arsenal came into the equation and of course I chose Arsenal," Lacazette said.

"Arsenal are a historic club. Arsene Wenger has been here for such a long time and there is a real level of stability at the club. He knows what he wants to achieve in the coming years. I liked the way he spoke about football and what he thinks of me. 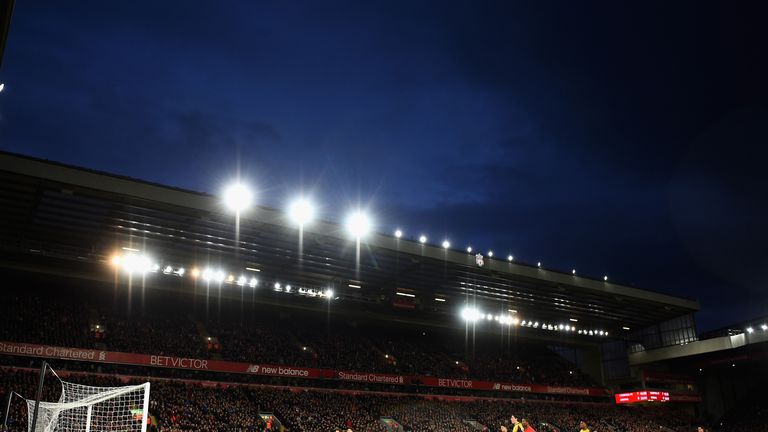 I think the atmosphere at Anfield is fantastic. So many people have told me that it's one of the best stadiums in England. I can't wait.

"He made a big effort to explain why he wanted me and what he wanted from a striker which fitted with what I was looking for. He managed to convince me that I'd be able to make progress here."

Lacazette started up front with compatriot Olivier Giroud on the bench in the defeat by Stoke last time out but the summer arrival believes the pair can play together.

"I think we certainly can," Lacazette said. "Especially because our games are very different. We can complement each other. We managed to do just that towards the end of the Leicester game when he came on and I tried to play my game in and around him."

Arsenal will hope to get back on track in front of the Sky Sports cameras and Lacazette is relishing a taste of Anfield's famous atmosphere.

"So many people have told me it's one of the best stadiums in England," he added.

"I know they Liverpool are a very good side and I saw that in their game against Hoffenheim, in terms of the way they press and go forward. I came here to play in this type of game. I can't wait."