Senegal caused one of the biggest shocks in World Cup history when they beat reigning champions France and reached the quarter-finals in 2002. Will their old guard now inspire Sadio Mane and Co to similar heights on their long-awaited return to the competition?

Aliou Cisse was there in Seoul and he will be there in Moscow too. The former midfielder was Senegal's captain 16 years ago, snapping at the heels of Thierry Henry and David Trezeguet as they famously defeated France on their way to the last eight, and this summer in Russia he hopes to mastermind another memorable World Cup campaign from the dugout.

Cisse has been Senegal's manager since 2015, when he was promoted from his role as assistant to take over from Frenchman Alain Giresse, and he is not the only link between the current set-up and the class of 2002. Senegal's coaching staff also features former goalkeeper Tony Sylva and former defenders Omar Daf and Lamine Diatta.

The decision to hand the reins to their most successful generation has paid off for Senegal so far. Having failed to qualify for three consecutive World Cups under a string of different managers, they did not lose a single game on their route to Russia. Cisse's side claimed back-to-back wins over South Africa and conceded just three times in six games overall.

It augurs well for what's ahead. "You could best describe the mood here as cautious optimism," Benjamin Tetteh, a sports journalist based in Senegal, tells Sky Sports. "In the qualification campaign, Senegal's performances were quite spectacular. They were one of the best performers in Africa. Of course there is caution about over-expectation, but the fans are happy."

Crucially, the players are happy too. Senegal's squad is strong, with Napoli's Kalidou Koulibaly providing leadership at the heart of defence, Idrissa Gueye, Badou N'Diaye and Cheikhou Kouyate comprising an imposing midfield, and Sadio Mane and Keita Balde leading the attack. But Cisse, who will be the youngest manager at the World Cup at 42, is also aware that talent alone will only get them so far.

"I think the coach is one of the main reasons for Senegal's success in the qualifiers," says Tetteh. "Some people were worried when he was appointed because we have seen local coaches struggle to bring discipline to their squads in other African teams like Ghana and Nigeria.

"But Cisse has managed to bring discipline to Senegal while unifying them at the same time. He has worked with the likes of Sadio Mane smoothly. We've not had the kind of friction we have seen in the Ghanaian team, for example, where some players have reported late to training camps. Cisse has a close relationship with his players and it has made a difference.

"You could see it throughout qualifying. At no stage did we have bad press about players revolting or players reporting late to training camps without any kind of justification.

"Even Mane has always rushed down as soon as Liverpool have made him available. And even when he has been injured, he has always wanted to come and watch. There have been problems in the past, but whatever differences or egos there were within the squad have been ironed out completely." 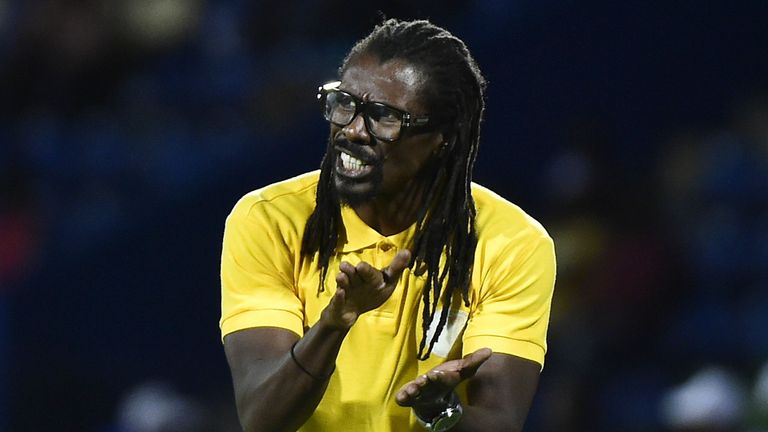 When you meet him you can see that he is a humble guy and a cool guy. He hasn't allowed the success so far to get to his head and he has endeared himself to the public.

It's down to Cisse's personality, according to Tetteh. "He is a huge figure here," he says. "Everyone wants to catch a glimpse of him and get close to him, and when you meet him you can see that he is a humble guy and a cool guy. He hasn't allowed the success so far to get to his head and he has endeared himself to the public. Everyone has bought into what he is doing."

The one criticism of Cisse is that he has at times struggled to get the best out of the attacking talent at his disposal. Senegal were held to a 1-1 draw with Uzbekistan in March, and their last two friendlies against Bosnia-Herzegovina and Luxembourg have both ended goalless.

The tactics can seem overly cautious at times, especially when you consider Cisse's options. Mane and Balde are the main men in attack, but the squad features six other forwards. Ismaila Sarr is a rising star at Rennes, and Cisse can also call on former West Ham striker Diafra Sakho, Stoke's Mame Biram Diouf and AC Milan's Mbaye Niang.

Finding a way to get them firing in Russia will be vital, but Senegal's chances are boosted by a favourable draw. In 2002, they were pitted against France, Uruguay and Denmark, but this year they have avoided any big guns, with Poland, Colombia and Japan comprising the rest of Group H.

"It will not be easy, especially not against Poland or Colombia, but the Senegalese people are optimistic about our chances of making it out of the group," Modou Gueye, a journalist for Senegal-football.com, tells Sky Sports. "The most recent friendly matches dampened the mood a little bit, but overall the fans are positive and excited."

So could there be another foray into the knockout stages in the offing? "The 2002 success had a lot to do with teamwork but they had their issues," says Tetteh. "El Hadji Diouf was a rebel who would break away and speak his mind freely. I think the bond with this team is stronger and the relationship between the coach and the players is stronger.

See every country's 23-man squad for the upcoming World Cup in Russia.

"Of course this Senegal team has exceptional players like Mane, but the bottom line is that they have played as a collective. That is how they earned their place in the World Cup and hopefully that unity will continue in Russia. Reaching the World Cup was one of the best things to happen in Senegal in recent years, especially after they struggled in the African Cup of Nations.

"It's big for Senegal. It's seriously big. The feeling now is that this is their time. This is the opportunity for Senegal to go out and make a difference."

Just like in 2002, much will depend on Aliou Cisse.