Jude Bellingham will be one of the most sought-after prospects in 2023 and likely to command fee in excess of £100m; the Borussia Dortmund & England midfielder is admired by Real Madrid, Man City, Liverpool and other PL clubs; This article was first published on Nov 2

The question was simple, rhetorical, and delivered with a blend of arrogance and authority: "Does Jude Bellingham want to win the Ballon d'Or?".

When you note which club has homed the most recipients of the accolade, the recruitment executive's choice of opening gambit sings.

Real Madrid will position their offer to Bellingham - the most coveted young midfielder in Europe - as his opportunity to become the best player in the world at the place that breeds champions.

And those tasked with helping the 19-year-old make the smartest decision on his future state there is no better sales pitch: he does not care about where he could bank the biggest pay cheque, but where he'll be challenged to become the optimum version of himself.

Bellingham has not concealed this to potential suitors privately and publicly. "I want to win way more, and I want to continue to push the boundaries of my own potential and talent," he said recently.

Bellingham's strength of character and clarity of what he expects from his career was central to him plumping for Borussia Dortmund when he joined from Birmingham City in the summer of 2020. 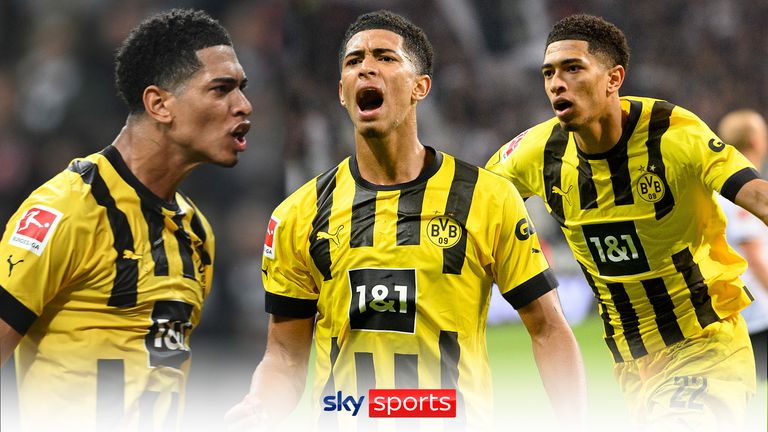 With Jude Bellingham linked with a move to the Premier League in January, watch all of his goals and assists in the Bundesliga for Borussia Dortmund.

Manchester United had offered more lucrative terms, gave him a tour of Carrington, and an audience with Sir Alex Ferguson. BVB distilled their push into a blueprint of how they'd aid his development and make him a full international within two years.

He'd be armed with European experience and a haul of minutes that many senior players around the continent would be envious of.

Bellingham spent months studying both clubs, as well the others that had made an approach to his dad Mark, from a purely football perspective. How did they use the ball, how did they react when losing it, where could he slot in, how would his gifts be maximised, and weaknesses eroded?

Bellingham will undergo the same process now on a different scale owing to the fee - in excess of £100 million - his talent now commands.

Real's charm offensive has already begun and there is great seduction in becoming core to, as the club executive calls it, "the next all-star midfield." Casemiro is gone, Luka Modric is 37, and Toni Kroos wants to retire at the Bernabeu even though he's aware he is part of the present and past but not the future.

Eduardo Camavinga, Aurelian Tchouameni and Federico Valverde will carry Real forward, with the hierarchy of Florentino Perez, Juni Calafat and Jose Angel Sanchez wanting Bellingham to be the golden thread.

They have the European royalty angle and haven't been shy of pointing to Kylian Mbappe's misery this season following his decision to snub them and agree to an eye-watering extension at Paris Saint-Germain coated with an insane level of influence.

The France international was also told he would be front and centre for the Ballon d'Or if he joined Real, and would know how it felt to 'own the Champions League.'

Mbappe, the Spaniards say, opted for power and a swelled bank balance over "the sporting project" and it should serve as a lesson.

PSG do count a Ballon d'Or winner in Lionel Messi, but that is merely by virtue of him being registered at the club during the 2021 edition, which recognised his exploits with Argentina, and on a lesser level, Barcelona.

The only player to lift the prize outside of operating for La Liga's behemoths was Manchester United's Cristiano Ronaldo in 2008.

Erling Haaland could alter that statistic at their neighbours Manchester City, and it is Pep Guardiola's side that Real perceive as the most serious threat to them securing Bellingham.

Perez's fears over the might of state-funded clubs is well documented but it is not the monetary element that is concerning in this regard. City are incredibly smart, well structured, and have a degree of stability across the operation not necessarily associated with Real.

Guardiola is a long-term admirer of Bellingham, already assessing two years ago: "He's so good for 17, he's a fantastic player. There was one moment when he didn't get the ball from central defenders, how he shouts and demands that ball to him at 17 means a lot.

"I spoke with his manager, Edin Terzic, and he told me what you see in these two games is like every training session."

City are plotting a midfield refresh as Ilkay Gundogan's contract is up at the end of the season, Kevin De Bruyne is 31, and Bernardo Silva has explored options to exit the Etihad in recent campaigns. Guardiola has stressed the importance of evolution in keeping his team as the benchmark.

Bellingham already has phenomenal chemistry with Haaland on and off the pitch, while it is impossible to argue he wouldn't "win way more" and "push the boundaries of my own potential and talent" at City.

United, meanwhile, have never scrubbed their interest in Bellingham. Their major priority in the summer is to add an elite forward, but they have credence they can battle for the best options on the market in every department under Erik ten Hag.

Liverpool's dossier on the England international stretches back to his time in Birmingham's academy and they are the top club most desperate for midfield surgery.

The Merseysiders are also viewed as the side who have put in the heaviest work over a long period behind the scenes to pierce the player's decision-making process.

When the manager committed his future to the club until 2026, Liverpool believed it offered an extra layer of certainty and continuity to their recruitment ambitions and ability to lure prized targets.

Their lack of on-pitch identity so far this season and early worries over whether they will finish in the top four could be problematic and undercut that - especially considering the financial outlay required to snare him. Even if Liverpool are able to remedy their form, can they afford to spend the amount being spoken about on one player given the other nips and tucks the squad needs?

In terms of whether a few months of poor play will make a massive difference, 'Team Bellingham' is known to wade through years of research on a club to get a panorama on methodology rather than make snap decisions based on either overperformance or underperformance.

Steven Gerrard is the midfielder's idol, but the teenager will not be swayed by sentiment.

A family friend told Sky Sports, "the way to win Jude's heart is selling the football plan to his head."

He also flagged that none of the fuss over Bellingham's future has been flamed by the Stourbridge native nor his camp. It has stemmed purely from his displays, which not only surpass those of a similar age but of the game's premier players.

In Europe's top five divisions and the Champions League, only Joshua Kimmich has won possession more in the final third than Bellingham, who also ranks second for completed take-ons.

Deeper than the data and the evidence of our eyes is the fact, as Guardiola touched on, that he is already a leader and craves responsibility.

"I have never seen a mentality more elite than his," he assessed. "When I worked with him, when something was tough, he loved it. I can remember games when he wanted to play himself at centre-half to test himself.

"Jude would actively go and seek the challenge without having to be pushed from the coaching staff."

Michael Dodds, the academy manager at Birmingham, would add: "He always wanted better sessions, more feedback, greater challenges. Nothing was enough, because there needed to constantly be a test for him."

Across the England set-up, there is a hankering to have Bellingham at a Premier League club. There is confidence he can develop into the national team's captain and Real know the pull of returning home might trump the glory they can offer.

Bellingham is extremely relaxed about his future. Why wouldn't he be when there is no shortage of quality destinations and clubs have to convince him why they are the strongest option to help him soar.