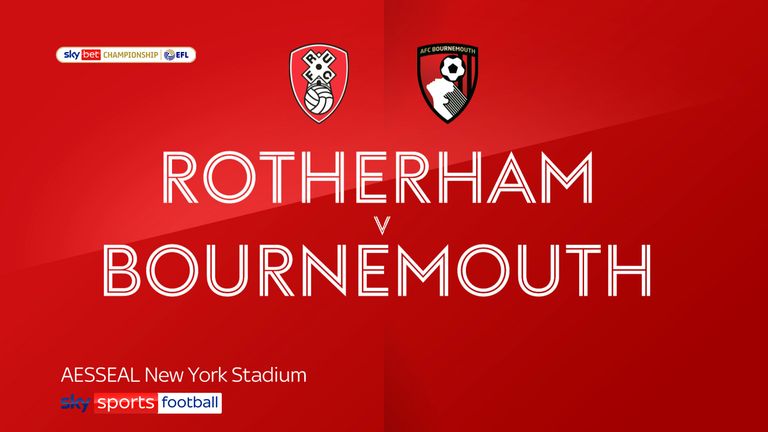 A double from Freddie Ladapo earned Rotherham a 2-2 draw against Bournemouth in the Sky Bet Championship.

The teams had been two divisions apart last season but Rotherham more than matched their high-flying visitors and were worthy of the point after forcing Cherries goalkeeper Asmir Begovic into a host of saves in an entertaining encounter.

Matt Crooks had an early shot diverted away from goal by the alert Chris Mepham but Bournemouth's first effort was closer when Junior Stanislas picked out Dominic Solanke - but he could not find the target as he slid in ahead of goalkeeper Jamal Blackman.

Blackman was then at fault as he collided with Solanke on the left-hand side of the box to give away a penalty. Stanislas took his time from the spot before striking it down the middle to give the visitors a 20th-minute lead.

The hosts were almost level inside a minute with Joe Mattock crossing for Jamie Lindsay - but his diving header was tipped over the top smartly by Begovic.

It was from the left flank where Rotherham got level on 37 minutes with Ladapo slotting into the bottom corner clinically after being found by Mattock.

Stanislas came close to his second either side of the break. He first tried to catch out Blackman at the near post with a long-range free-kick and was then denied by a diving save from the Chelsea loanee.

But it was the home side and Ladapo celebrating a double five minutes into the second half as the striker beat Begovic with an audacious chip into the far corner from the left side of the box.

The goal came just moments after Begovic had denied Lindsay's stinging drive from the edge of the box.

The Cherries levelled on 63 minutes, with substitute Diego Rico having an instant impact and teeing up Solanke to head home from 10 yards out.

Begovic again came to the rescue to keep out Angus MacDonald's stunning acrobatic volley with a diving save. Crooks turned in the rebound but was ruled to be offside.

Blackman beat Solanke to a through-ball as their own personal battle continued and Philip Billing smashed over from the edge of the box as the visitors cranked up some late pressure.

Jefferson Lerma momentarily had Blackman scrambling but his long-range chip, with the goalkeeper way off his line, was just over the bar as Jason Tindall and his team had to settle for a point.

Rotherham's Paul Warne: "It's the most complete 90 minutes we've had this season. I thought we started really well - the first time they went into our box was when we gave away the penalty. I was worried how that would effect the lads but I think they gained so much confidence from their start. I think we were more than deserving of a point.

"All our set-pieces were a little bit more on point. You need a good delivery and aggression in the box. That was a real weapon in our arsenal. There were some outstanding performances. The goalscorers get the headlines but they were all headline makers. It should give them confidence but they have got to raise their game against Brentford in a few days."

Bournemouth's Jason Tindall: "I am disappointed we haven't won the game. This is always a difficult place to come with their style of play. You are going to face a lot of long balls and a lot of direct play. It was an ugly game, to be honest.

"We had to stand up and do all the ugly stuff well. For large parts of the game we did that. We will take the point and move on. We dust ourselves down and look forward to Tuesday."