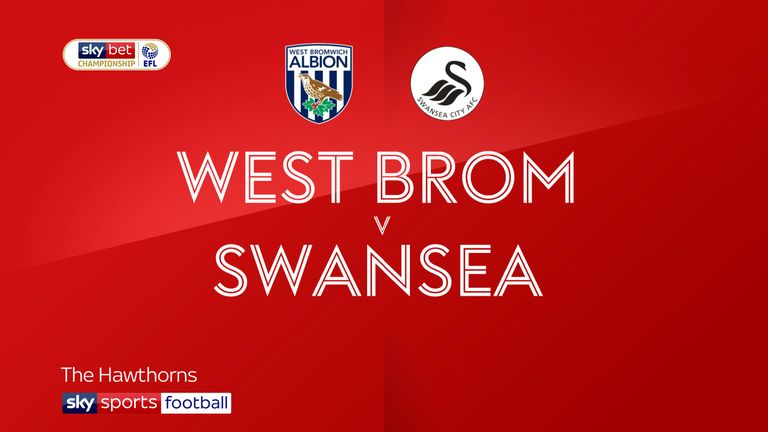 Matheus Pereira ran riot as West Brom thrashed Swansea 5-1 and went top of the Championship with a sixth-straight win.

Out-of-form Swansea started brightly at The Hawthorns before Semi Ajayi headed in from a corner in the 25th minute and Pereira then curled inside the near post from Kieran Gibbs' lay-off to double the lead.

Swansea pulled back the goal they deserved when Sam Surridge bundled home from a corner in the 39th minute, but their comeback hopes were dented when Pereira's beautiful reverse pass sent Hal Robson-Kanu through to add a third just before half-time.

The second half was all West Brom and they made it 4-1 from another Pereira assist with 20 minutes to go, as he lifted a perfect ball in for Matt Phillips to head home, and there was a fifth to follow moments later as youngster Kyle Edwards netted his first home goal with a composed finish.

How the Baggies bounced to the top

West Brom were heavy favourites to rack up a sixth win in a row at home to a Swansea side who had only two points to show from their previous four games, but the visitors settled quicker and Surridge forced Sam Johnstone into an early save as they forced a number of corners without seriously threatening.

What turned into a lesson in finishing from the Baggies didn't get off to the best start as Kyle Bartley headed straight at Freddie Woodman from four yards out after a free-kick, but he made amends moments later to head a corner back across goal for Ajayi to nod in the opener.

Both sides named unchanged line-ups from their previous games

It was soon two thanks to a moment of class from the hosts, with Grady Diangana threading the ball out to Gibbs on the left, and from his low cross Pereira bent the ball past Woodman and inside the near post.

Surridge gave Swansea hope as he turned George Byers' corner in at the second attempt from a yard out, but before half-time the hosts restored their two-goal cushion when Pereira's sensational disguised pass released Robson-Kanu who finished calmly.

West Brom barely gave Swansea a sniff in a second half where the visitors registered only two shots, but the hosts remained just as rampant and netted a fourth with 20 minutes to go through Phillips, who dived to meet a sensational curling ball from deep, delivered, once again, by Pereira.

The Baggies were not done there and showed their remarkable hunger with a fifth goal four minutes later, as Edwards, only on as a substitute after the fourth goal, turned inside Connor Roberts before firing in from eight yards.

As two minutes of added time were signalled by the fourth official the home crowd booed, wanting this footballing masterclass to continue a little longer, but at the full-time whistle they could celebrate a sixth consecutive win and a place at the Championship summit on the back of a wonderful performance.

Man of the match - Matheus Pereira

There's not much left to say about the Sporting loanee. He so often looks a class above everyone else on the pitch and at times he did against Swansea, jumping to the top of the Championship assist charts with a hat-trick of goals created.

The pick of the bunch would either be the wonderful pass to Robson-Kanu or the way he unselfishly lifted the ball into Phillips for West Brom's fourth, but either way the Baggies are never going to be far from the goals with him on the pitch. Swansea host Blackburn on Wednesday night while West Brom travel to Wigan, at 7.45pm. Both games are live on the red button on Sky Sports Football, and via the Sky Sports app, from 7.40pm.