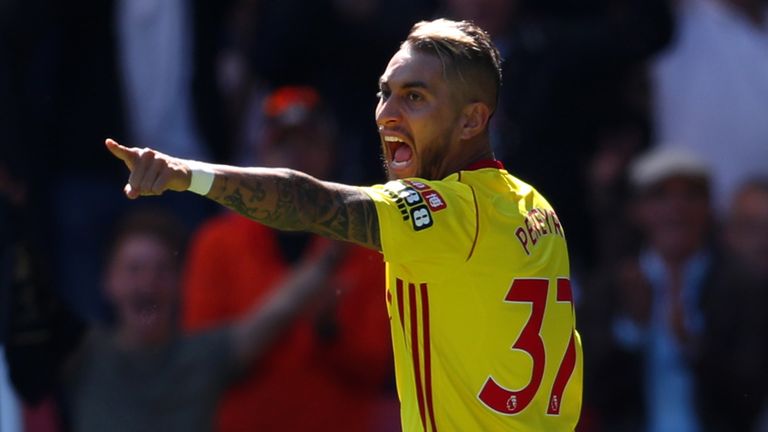 Two first-half goals confirmed Watford's Premier League status and gave them their first win since early March as they saw off Newcastle 2-1 on Saturday in the Premier League.

Hosts Watford took the lead after just three minutes as Roberto Pereyra simply finished off a move involving Andre Gray, Troy Deeney and Abdoulaye Doucoure, and it was 2-0 on 28 minutes as Gray nodded home at the far post from Pereyra's cross.

Deeney saw a late first-half penalty saved by Martin Dubravka, before Ayoze Perez halved the deficit 10 minutes after the break with a fine far-post finish with the outside of his boot.

Man of the match: Roberto Pereyra

Newcastle pressed well but could not find a winner, meaning Watford go up to 13th, while Newcastle stay 10th.

Watford were quickest out of the stops and took the lead through Pereyra's finish from 10 yards, slotting home at the near post after Paul Dummett have failed to clear the ball in the box, allowing Doucoure to feed the Argentine to score.

It should have been 2-0 on seven minutes as Pereyra and then Deeney saw close-range efforts blocked by Dubravka, and the Newcastle goalkeeper was again at his best to deny Gray's effort from an angle inside the box.

Gray got his goal a minute later, however, heading into the empty net at the far post as Pereyra found a yard to cross from the left, over the stretch of Dubravka.

Watford made three changes after the defeat by Spurs on MNF; Janmaat, Pereyra and Deeney came in, replacing Richarlison, Femenia and Mariappa, who all dropped to the bench
For Newcastle, Manquillo replaced Yedlin, and Murphy came in for Ritchie, who also dropped to the bench.

Roger East handed Watford a penalty on 39 minutes after Dummett's clumsy slide on Gray, but Dubravka guessed correctly to his right to save Deeney's spot kick, and then got up well to block the rebound.

Newcastle battled superbly in the second half and scored with their first shot on target through Perez, brilliantly turning the ball home on the stretch with the outside of his boot from Javier Manquillo's right-wing cross.

Adrian Mariappa nearly turned into his own net midway through the second half, and Perez hit the outside of the post with a fine flick from a corner, but Watford held on to make sure they'll be playing Premier League football for a fourth straight season.

Javi Gracia: "I'm very proud to belong with this club, I am very happy here. In the end we are very happy because we achieved the objective, to stay in the Premier League again. We can say that now, not before."

Rafa Benitez: "The main thing was to stay up. Now we know we have to keep doing the same thing, but we're not doing that at the moment, so we'll see what happens.

"It's a question of showing what we are capable of doing. I feel like second half was the team we are used to seeing, the last game when we were winning a lot of games in a row."

Rafa Benitez was frustrated with Newcastle’s first half display

Jonjo Shelvey was absent in the first half, but impressed in the second with some trademark crossfield passing. Shelvey has that knack of finding strikers in-behind even the deepest line of defence, but the feeling is Southgate is likely not to risk the Newcastle man in Russia.

Man of the match - Roberto Pereyra

The Argentine scored the first and set up the second as Watford created a flurry of chances in the opening 45 minutes.

His cross for the second, Andre Gray's far-post header, caught out the otherwise faultless Dubravka, and he completed a team-high 91.3 per cent of passes, and 84.6 per cent in the opposition half.

He was brought off early in the second half with what looked to be an injury, and Watford missed his creativity and dynamism thereafter.

Watford now go to Manchester United on the final day of the Premier League season, while Newcastle face Tottenham on Wednesday night at Wembley, and then host Chelsea on the final day.

Pick your dream team for Chelsea v Liverpool to be the latest £50k jackpot winner.