Watford 1-2 Swansea: Late goals get Carlos Carvalhal off to flyer and lift Swans off bottom 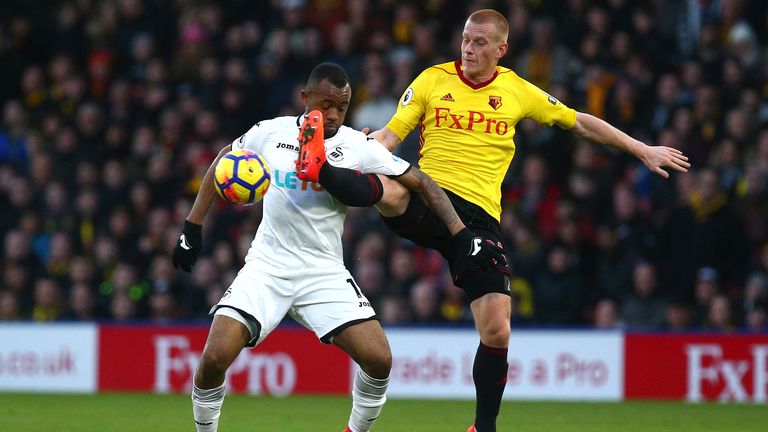 Goals from Jordan Ayew and Luciano Narsingh saw Swansea stage a dramatic late comeback to earn a 2-1 win at Watford and move off the bottom of the Premier League table.

Carlos Carvalhal's first game in charge of the Swans had looked like it would be settled by Andre Carrillo's first goal for the Hornets, after the Peruvian headed home early on at Vicarage Road.

But Ayew turned in an Oli McBurnie header from close range in the 86th minute to level for the visitors - the home players and fans thought the striker was offside, but the goal was rightly awarded.

And in the final minute, Narsingh netted his first Premier League goal for the Welsh club when he was the first to react to Heurelho Gomes parrying a Nathan Dyer shot.

Man of the match: Lukasz Fabianski

The Dutchman ran to his new manager and the celebrations showed what the three points meant to Swansea and their new backroom staff.

Richarlison looked dangerous throughout the game for Watford, showing his intent from the second minute when he beat Federico Fernandez to the ball, resulting in a caution for the Swansea man.

Carlos Carvalhal gave Renato Sanches his first start in over a month. The recall of his compatriot was one of three changes for Swansea. Watford made just one change with striker Stefano Okaka replacing Roberto Pereyra.

The Brazilian made a more telling impact, as he raced onto a pass from Stefano Okaka before having shot parried into the path of Carrillo who calmly headed home in the 11th minute.

Watford were dominant for 85 minutes and should have completed the victory without too much trouble, but let themselves down late on and should have won it when Andre Gray was sent through, but the striker panicked and struck the ball straight at Lukasz Fabianski.

In the 86th minute McBurnie was given space to head a right-wing cross into the path of an unmarked Ayew who side-footed the ball home from six yards. There were plenty of protestations from those in yellow, but they were rightly ignored.

Four minutes later, Watford failed to properly clear a free-kick, allowing Dyer to send a shot in, which Gomes could only send straight into a dangerous area where Narsingh was waiting to net the winner.

The three points were crucial for Swansea, who looked short of confidence for much of the match, but now find themselves off the bottom, if only in 19th place.

Swansea boss Carlos Carvalhal says he feels compensated for his hard work after he started his new job with a win at Watford.

Marco Silva: "Of course all of us are disappointed, our fans as well, because until the moment their first goal is scored, we controlled the match. Until that moment, I cannot remember one chance they had in the match. At this level, when we have a chance we need to score.

"We had two clear chances to score. Some seconds before they scored the 1-1, we had a clear chance with Andre and the goalkeeper and in that moment we need to kill the match."

Watford boss Marco Silva says his side needed to kill off the game after being beaten by Swansea in a match he believed his team controlled.

"Second half we start taking risks, putting players in attack, all three players we put on affect the game.

"I will not say we deserved the win, as we played against a good opponent who had good chances. Luck is part of the game and they were lucky when we hit the back."

Man of the match - Lukasz Fabianksi

In a game short on quality, it was the Swansea goalkeeper who kept his side in the match, especially when he prevented Gray moments before the equaliser.

Swansea will host Spurs at the Liberty Stadium live on Sky Sports Premier League on Tuesday night, with the game kicking off at 7.45pm.

Watford also face a tough task on Tuesday when they travel to Manchester City.