Wigan hold off Sheffield Wednesday at the DW Stadium 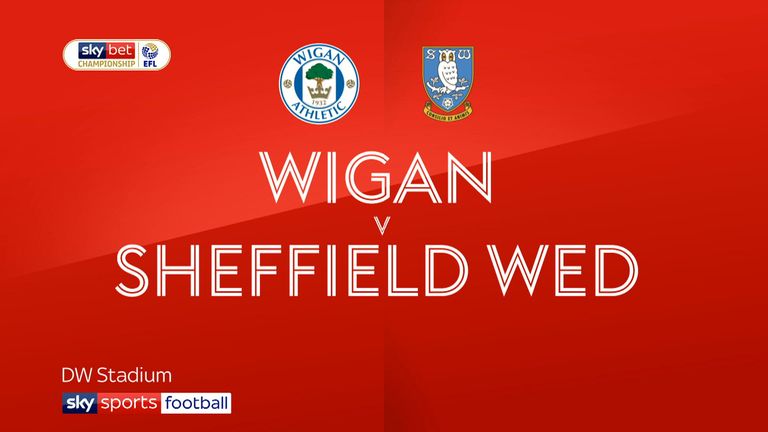 Wigan got off to a dream start on their return to the Sky Bet Championship by edging Sheffield Wednesday 3-2 in a thriller at the DW Stadium.

Michael Jacobs was the hero for last season's League One title winners, with two goals in a fantastic first-half display in which he also hit the crossbar.

His opening goal in the 10th minute was cancelled out 10 minutes later by Atdhe Nuhiu, before Jacobs restored the Latics' lead after 26 minutes.

After Jacobs hit the crossbar shortly before half-time, Wigan picked up where they left off after the restart as Nick Powell bundled the ball home from close range to make it 3-1.

Fernando Forestieri pulled a goal back midway through the second period, but the visitors were unable to get back on level terms.

Their attempts at a late leveller were not helped by the sending-off of Nuhiu at the beginning of five added minutes for a late challenge on Chey Dunkley.

Two of Wigan's four new players were called into action inside the opening five minutes, with Antonee Robinson and Cedric Kipre both showing quick feet to keep the Owls at bay.

But at the other end, Wigan were also looking dangerous, with Reece James - another making his bow - seeing a goal-bound effort blocked after Jacobs' cross was too high for Will Grigg.

Jacobs was in action again moments later, and this time he opened the scoring with a shot - via a slight deflection - into the far corner.

However, the lead only lasted 10 minutes before Wednesday were level, Nuhiu following in from close range after Kipre had cleared off the Wigan line.

With only 20 minutes of the season gone, the game was already end to end, and Wigan went back in front when Jacobs tucked home from 12 yards.

Jacobs was everywhere at this point and his corner was headed inches over by Dunkley - the big defender punching the air in recognition of how good a chance it was.

Jacobs came within inches of a first-half hat-trick when his curling effort beat goalkeeper Cameron Dawson only to hit the bar on its way over.

Gavin Massey forced a good save from Dawson shortly after the restart, before Wigan opened up a two-goal advantage on the hour mark.

Captain Sam Morsy led a lightning-fast counter before feeding Jacobs, whose shot was only parried by Dawson into the path of Powell, who could not miss from close in.

A great save from Christian Walton prevented Sam Hutchinson from pulling one back immediately, but Wednesday reduced the arrears after 67 minutes when Forestieri nodded home past the helpless Wigan goalkeeper.

Wigan almost made it safe inside a mad 60-second spell with 17 minutes to go when they came close on three occasions.

A flick header from substitute James Vaughan hit the bar with Dawson beaten, before Massey was then denied by a brilliant save.

Then, with the ball still in play, Massey's cross was back-heeled home by Vaughan, whose celebrations were cut short by an offside flag.

Wednesday never gave up the ghost, but they were unable to force Walton into much extra work. And their cause was not helped on the stroke of 90 minutes when Nuhiu was given a second yellow card for jumping into Dunkley as the Wigan centre-back headed away.

Paul Cook: "It was just a great advert for football wasn't it? Probably the sending-off tainted it a little bit at the end, but the game was played in a very good spirit.

"It had everything you'd want when you go to a football match...goals, entertainment, hitting the woodwork, goals disallowed. To play a side as strong at this level as Sheffield Wednesday, with the support they brought, I thought our lads handled the occasion so well. It was a very strong team performance and, in my opinion, a very deserved win."

Jos Luhukay: "I was surprised with the lack of stability we had in our defending. We've had so much progression over the last few months since the end of last season, and today we gave so many chances away."This is not what we can do.

"We have to be much better and we have to get better very quickly."