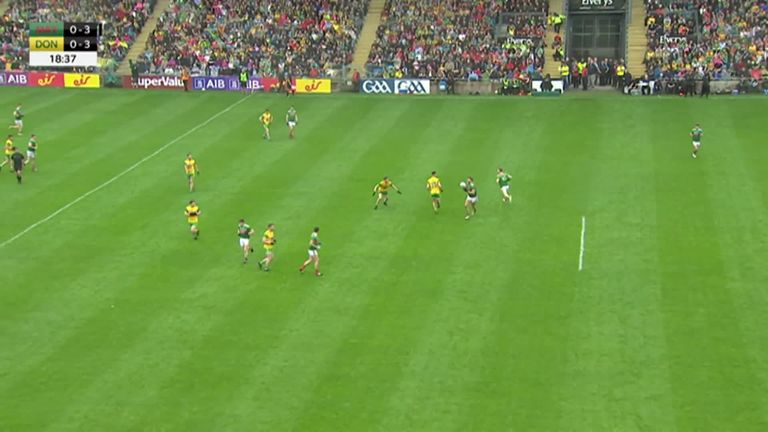 Mayo are through to the All-Ireland semi-finals after overcoming Donegal 1-14 to 1-10 in a Super 8s arm-wrestle.

Mayo never do things the easy way, do they? Easing through the Super 8s with one game to spare was never going to be their style.

As has been the case throughout the decade, this group saved their best football when their backs were to the wall.

James Horan's team met Donegal head-on and prevailed in a war of attrition in Castlebar.

In difficult conditions, Donegal burst into an early lead, with Paddy McBrearty and Niall O'Donnell sending the umpires scurrying for white flags.

However, buoyed by the vocal home support, the Connacht side began to grow into the game. Dominating the middle third, Horan's side were applying real pressure on their visitors.

Jason Doherty and Paddy Durcan, in particular, were proving a handful for the Tír Chonaill backs, but Mayo were wasteful in their shooting.

Nonetheless, the men from the west eventually began to make the pressure tell on the scoreboard. James Carr, Jason Doherty and Paddy Durcan scored points, before a 28th-minute goal from Cillian O'Connor put real daylight between the teams and gave Mayo a six-point lead at half-time, 1-7 to 0-4.

Donegal were looking to get off to the perfect start after the break, and they did just that in the 39th minute. A high ball was sent in on top of Michael Murphy, and the Glenswilly man was fouled by Lee Keegan. David Gough stretched his arms wide for a penalty, and Murphy buried it to bring it back to a three-point game.

From there, the intensity rose around MacHale Park. Carr and Durcan picked scores for the home side, but Murphy and O'Donnell kept Donegal in touch.

As the game entered seven minutes of injury-time with Mayo two points to the good, there were barely any finger nails left in MacHale Park.

But cometh the hour, cometh the man - former Footballer of the Year Andy Moran stood up when he was needed most with two injury-time points to put the game beyond Donegal's reach.

The Connacht county will face the winner of Tyrone vs Dublin next Saturday in the All-Ireland semi-final.