Sky Sports pundit Peter Canavan gives his thoughts after Kerry, Mayo and Donegal picked up comprehensive wins in their opening championship encounters, and explains why he thinks some lower tier counties are short-changed this summer.

Saturday's win over Clare threw up both positives and negatives for the Kerry footballers.

The main positive - and Peter Keane was quick to highlight this himself - was that they had a championship match to win, and it never looked in doubt against a team that many people thought would pose problems for them.

Clare would be considered on a similar footing to Cork in Munster, and it was the Rebels who beat Kerry last winter.

The Kingdom disposed of the Banner with ease.

Secondly, Keane cannot but be thrilled with the performance of Paudie Clifford. There's a lot of talk about his younger brother David, but the elder sibling is on fire right now.

Paudie appears to be getting stronger with every game he plays. He's a worker in the half-forward line.

He is also supremely creative, as we witnessed with the pass he gave to Seán O'Shea. When he intercepted that ball, his first instinct was to get his head up and deliver the pass of the season so far.

And he can score too. He's direct when he gets the ball. So that's something that they didn't have the past few years, and he's a serious addition.

One cause for concern was the kick-outs.

Before the match on Saturday, I singled out Kieran Fitzgibbon, praising him for how effective his restarts were against Tyrone.

He looked flustered on Saturday.

Without being overly aggressive with their press, Clare did enough to force him into kicking the ball over the sideline twice. He failed to get it outside the 20m line on one occasion.

At times, Kerry looked average on their own kick-out. Moving forward, that's something that they're going to have to address.

The major talking point in Newry on Sunday was the injury sustained by Michael Murphy.

Many questioned before the match whether Declan Bonner needed to risk his talisman, who was returning from a hamstring injury. If there was any doubt, he should have been rested. I was certainly of that opinion.

Granted, you never know what is going on at teams' training sessions. By all accounts, he had been moving well last week. But it was a gamble that certainly didn't pay off. Now the Glenswilly man is a doubt for the Ulster Championship quarter-final against Derry.

Nonetheless, Donegal had enough to see off the Mourne County even after Murphy's withdrawal.

It might have been a different story had Down been more ruthless with their shooting. Donegal had 32 shots to Down's 27. The Division 1 side prevailed 2-25 to 1-12.

I predicted on-air before throw-in that Aidan O'Shea would score 2-2 at full-forward. He ended up with 1-3. Maybe he should have taken his point instead of scoring his second goal!

But once again, he showed just how much a threat he can be in the inside forward line.

He can play both midfield and closer to goal.

James Horan must decide when the best time is to put the Breaffy man inside.

There wasn't must else to glean from Markievicz Park. It looked like a Division 1 team playing a Division 4 team in virtually every area of the pitch.

The other notable aspect was the performance from Darren McHale on his debut, scoring 1-5. If he can replicate that form throughout the championship, what an addition he will be to the half-forward line. 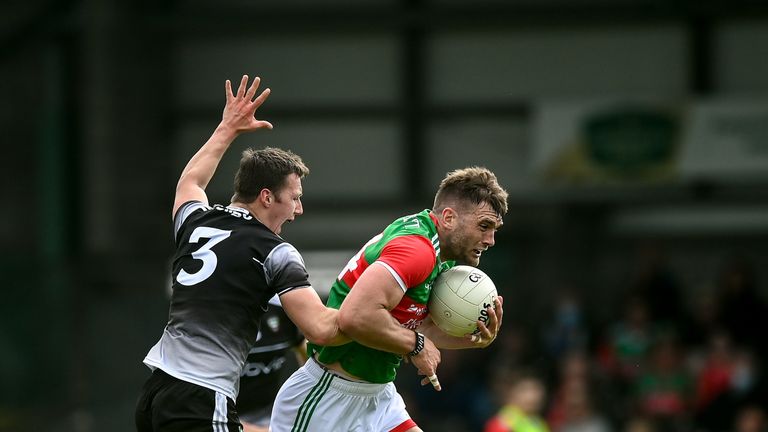 No back door stems progress for lower tier teams

This year's structure is doing no favours for certain counties.

I get it - due to Covid-19 there is no time for a qualifier system.

There is a number of teams that have made progress through the league, but they came up against top opposition in the first round of the championship.

Clare's summer is over. Antrim could be in the same position next week, whereby they made good progress but their season comes to an abrupt halt.

If Louth were guaranteed three to four games like the one they had against Offaly, then under their management I have no doubt they would make serious improvements.

It is an unfortunate consequence of the Covid situation, but time was needed for club competitions too.