Match report and highlights as Kerry reach the Munster final with a 1-19 to 1-8 win over Tipperary at Semple Stadium, Thurles. Seán O'Shea (0-8) and David Clifford (1-2) led the line for the Kingdom, as they set up a Munster final date with Cork. Kerry have set up a Munster final showdown with Cork, after dethroning the reigning provincial champions Tipperary with a 1-19 to 1-8 win at Semple Stadium.

It is a testament to the progress being made by this Kerry team to suggest they never truly caught fire in an 11-point away victory over last year's Munster winners.

The Kingdom once again showed their fire-power up front as Seán O'Shea and David Clifford led the line in impressive fashion.

Tipperary put in a major shift in the early stages, keeping possession and frustrating the Kerry attack. It started out as a low-scoring contest, with the teams locked at 0-1 apiece after 12 minutes.

However, the favourites finally found their breakthrough in the 15th minute, as a storming run from Gavin White sucked in three defenders, before he played it out to David Clifford. The Fossa man made no mistake, rifling it past Evan Comerford from a tight angle into the roof of the net. 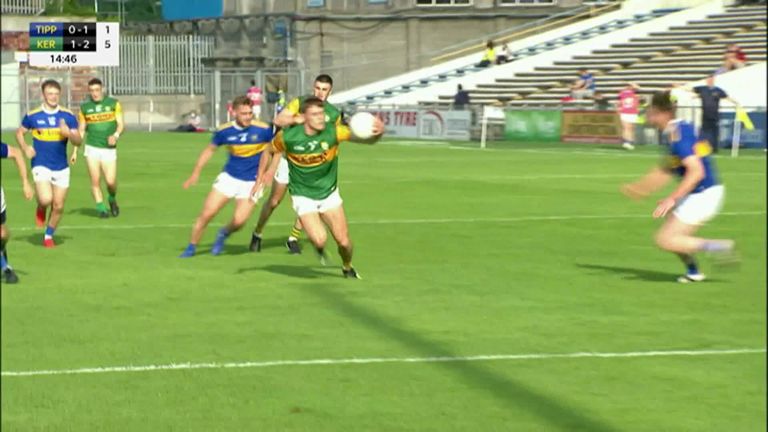 Kerry followed it up with points from Paul Geaney and Seán O'Shea, before the Premier County found a response. Jack Kennedy was brought down entering the square, as he was about to pull the trigger, and Conor Sweeney converted from the penalty spot to bring it back to 1-3 to 1-7.

However, the visitors finished the half with a flourish, with O'Shea adding some sweet scores to stretch the gap to eight, 1-11 to 1-3.

Frees from Conor Sweeney and Jack Kennedy got the scoreboard moving for Tipp, but any slight hope of a comeback was ended when Michael Quinlivan was shown a straight red card for an off-the-ball challenge on Gavin Crowley.

The home side's woes were compounded moments later when Jason Lonergan was shown a black card.

The 13 men of Tipp looked to limit the damage.

Stephen O'Brien, Seán O'Shea, Tommy Walsh and Diarmuid O'Connor all spurned goal opportunities. Kerry will be hoping to be more clinical when the Rebels come to Killarney.

The floodgates never quite opened, as Kilian Spillane, David Moran and Tommy Walsh tagged on points to bring the final margin to 11 points.

Overall it was a satisfactory evening for Peter Keane and Co. Next up is a Munster final date with Cork in Fitzgerald Stadium, Killarney.

Revenge will be on Kerry's agenda, as they plot a return to Croke Park.