Aidan O'Shea the key for Mayo against Dublin? Kieran Donaghy and Peter Canavan discuss how to best utilise the Breaffy man

If Mayo are to deliver their first championship win over Dublin since 2012, the Connacht champions will need Aidan O'Shea playing at his best.

The men from the capital have managed to curtain the Breaffy man in recent years, but James Horan will be looking to unleash the Mayo captain on Saturday evening.

So how can they best utilise their talisman against the reigning All-Ireland champs?

"Aidan O'Shea, the way Mayo are using him [is] bringing him in and out," explained Kieran Donaghy on Inside The Game.

"When he goes in, it doesn't necessarily have to be high ball at all. If they can dink ball in front of him into his chest and get runners like [Ryan] O'Donoghue and Tommy [Conroy] coming off him, or the likes of a Paddy Durcan flying through from the half-back line, we've seen them open up Dublin before with Lee Keegan's goal (in 2017), using him as target man, but not necessarily having to put everything in front.

"Maybe he wins a few out in front, he's linking guys. That's when Aidan O'Shea will maybe get the chance to put his body behind someone and get one in over the top or maybe get his own goal.

"You saw when he was in this year against Sligo, every time he got a goal, there was a lift in the team. You could see it. And he bagged 2-2 that day. Something similar is needed by the big man this week if they're going to turn over Dublin." 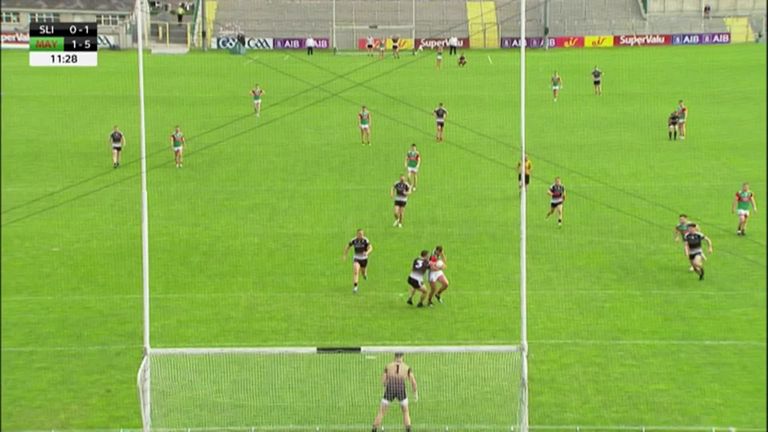 Peter Canavan was in agreement that the Westerners must mix their use of O'Shea throughout the contest.

"They're going to have to vary him from midfield to full-forward, similar to how he was able to do that against Galway," opined the Tyrone great.

"But by him going into the full-forward line, it's going to ask questions of Dublin. Will Dublin be happy leaving Davy Byrne or Jonny Cooper on him? I don't think so. They may have to call James McCarthy or Brian Howard back to keep tabs on him.

"I think they have to use him sensibly by bringing him in and out, giving him a breather by playing him in for 10 minutes.

"But it's imperative that when he's inside, there is proper ball played into him. And that he has players moving around him. With Ryan O'Donoghue and Tommy Conroy, he has busy, fast players around him. I think the best way to utilise Aidan O'Shea would be to play him in midfield for periods, and switch him inside for other times."