Joburg Open: Jacques Blaauw one ahead after storm-affected round

Jacques Blaauw holds a one-shot lead over Wilco Nienaber at the European Tour's Joburg Open; 39 players unable to finish their second rounds due to storms - watch the third round live from 10am on Sky Sports Golf 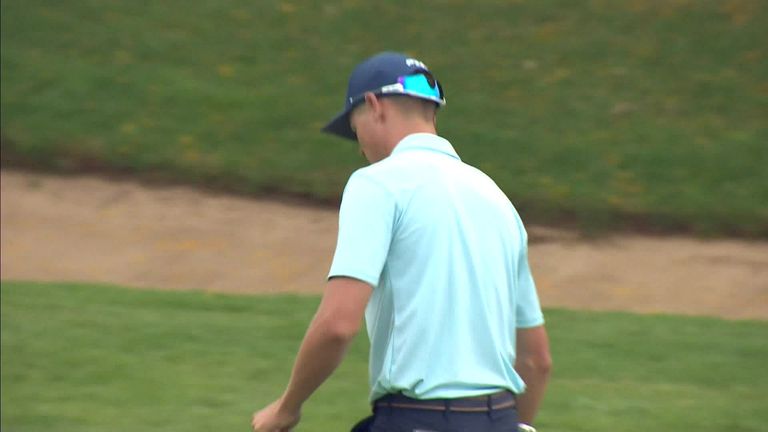 South Africa's Jacques Blaauw edged into a one-shot lead after a weather-disrupted second day at the European Tour's Joburg Open.

The world No 476, who has posted top-six finishes in his last four starts on the Sunshine Tour, carded a round-of-the-day 63 on the Firethorn Course at Randpark Golf Club to head into the weekend on 13 under.

Blaauw's closest challenger is big-hitting Wilco Nienaber, who gained plenty of social media attention for a 439-yard drive during his opening round, with the South African a shot of the lead after following a first-round 63 with a four-under 67 on Friday.

Play was suspended for nearly two hours during the afternoon due to the threat of lightning, leaving 39 players - including Joachim B Hansen in tied-third and Shaun Norris in fifth - unable to complete their second rounds before darkness.

Nienaber failed to get up and down from short of the second green to save par but responded with three straight birdies from the third, with the overnight co-leader rolling in a 20-footer at the ninth and picking up a shot at the 14th before play was halted at 3.50pm local time (1.50pm GMT).

Blaauw was also on 12 under with two holes to play when play was suspended, with three birdies in a four-hole stretch around the turn and a long-range eagle at the 14th jumping him up the leaderboard.

He then birdied the par-three 17th soon after play resumed to set the clubhouse target, with Nienaber matching Blauuw's gain to bounce back from a bogey at the 16th and stay within one of the lead.

Four birdies in the first six holes helped Aaron Cockerill to a three-under 68 and a share of third alongside Hansen, who is also on 10 under for the tournament with two holes of his second round remaining, while overnight co-leader Norris is a further shot adrift with three still play.

Back-to-back 67s lifted Richard Bland into a share of sixth with Wales' Rhys Enoch and American Julian Suri, while Christiaan Bezuidenhout - the highest-ranked player in the field - sits tied-19th following a two-under 69.

Watch the Joburg Open throughout the weekend live on Sky Sports. Live coverage continues on Saturday from 10am on Sky Sports Golf.