"Obviously I'm very happy about that, but I'm sorry for Lee because I did a couple of stupid things to him this week"; Sergio Garcia hit a walk-off ace to beat Lee Westwood on the fourth playoff hole to reach the last 16 in Austin 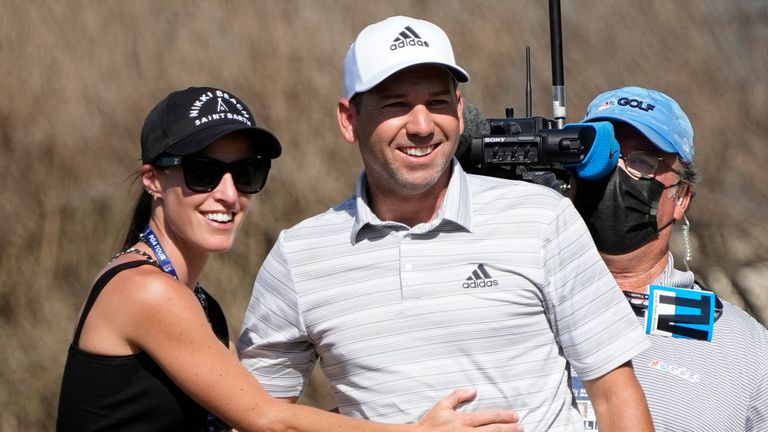 Sergio Garcia reached the last 16 of the WGC-Dell Technologies Match Play in spectacular style, making a hole-in-one to beat Lee Westwood in Austin.

Garcia comfortably beat his long-time friend and Ryder Cup team-mate in their opening Group 8 encounter, but the Spaniard suffered a 3&2 defeat to Matt Wallace in his final match, while Westwood cruised to a 4&3 win over Tyrrell Hatton.

That left them level on two points each and resulted in a playoff for a place in the knockout phase, and both missed from seven feet at the first extra hole before Garcia scrambled two clutch pars to keep himself in the tournament.

Westwood then knocked his tee shot at the short fourth to the heart of the green, but Garcia took dead aim from 161 yards and his ball pitched just a few inches beyond the flag before spinning back into the cup to settle the contest with an amazing ace.

"I really don't know what to say, but obviously a hole-in-one is amazing," said Garcia, who now plays Mackenzie Hughes in the last 16. "The two putts I made on two and three were massive to keep myself going.

"And then obviously the shot on four, it's a great shot, but then you get lucky that first of all, it doesn't hit the flag because it must have been very close to hitting the flag, and then it rolls back in.

"Obviously I'm very happy about that, but I'm sorry for Lee because I did a couple of stupid things to him this week, the first day and today, but unfortunately one of us had to lose."

Garcia also revealed he was struggling with cramp in his foot during his defeat to Wallace in a match that was all-square at the turn, with the Englishman edging ahead with a birdie at 10 before Garcia put two balls in the water at the 13th and then bogeyed the next to go three down.

"It was a tough day," he added. "I don't like to obviously make excuses, but obviously Matt played probably his best match of the week. I had a little problem with my left foot throughout the day. I had to take some Advil on the sixth green because the arch of my left foot was cramping and I was struggling to get through the ball.

"Because of that, I didn't hit the ball as well as I did the other days. I didn't hit it poorly, but I just didn't hit it quite as well. I'm going to have to work on it because tomorrow hopefully is going to be a very long day, and I need my feet to be in perfect shape."