Englishman Matt Wallace and American Jordan Spieth move to top of the leaderboard at TPC San Antonio as Charley Hoffman continues his charge to be two behind in third place; watch the final round live on Sky Sports Golf from 6pm on Sunday

Matt Wallace and Jordan Spieth moved into a share of the lead after the third round of the Valero Texas Open after carding five-under 67s at TPC San Antonio.

The pair are on 12-under 204 after 54 holes, two clear of Charley Hoffman with halfway-leader Cameron Tringale in fourth place on eight under.

Englishman Wallace, seeking his first PGA Tour win, started the day alongside Spieth two behind Tringale but vaulted into the lead after birdieing the opening two holes as the American bogeyed the second.

The 30-year-old parred the next eight holes before ending a run of 31 holes without a dropped shot when he three-putted the 11th for a bogey.

Wallace bounced straight back by sinking a 17-footer for birdie at the 12th and then holed from 17 feet for a gain at the 15th before closing with back-to-back birdies, after driving into the greenside rough at the short par-four 17th and then finding the green in two at the par-five 18th with a superb second shot.

"Started off lovely, that settles you down," Wallace said. "I felt nervous, but that's a good thing because we haven't been in that situation for a while, you know, with fans and being in Jordan's home state. I'm very happy with today's work.

Spieth, without a victory since The Open in 2017, trod water on the front nine with his first birdie of the day coming at the ninth where he holed an 11-foot putt after earlier bogeying the fourth.

The 27-year-old Texan then surged up the leaderboard with birdies at the 12th, 14th and 15th before matching Wallace's two closing birdies, although he needed an excellent up-and-down from a cart path at the 17th before just missing his eagle putt at the last.

"I hit some really nice shots towards the end of the round, left the ball in the right spots when it was missed and really, I did a great job managing today," Spieth said.

"I didn't feel like I had great control of the golf ball. Just starting out on the range today I got into some bad habits that I've been trying to work my way out of and just thought I really needed to just manage the round well and kind of let chipping and putting kind of take over."

Hoffman was five over after 14 holes on Thursday but he continued his charge by firing the lowest round of the day for the second day running to get to 10 under. 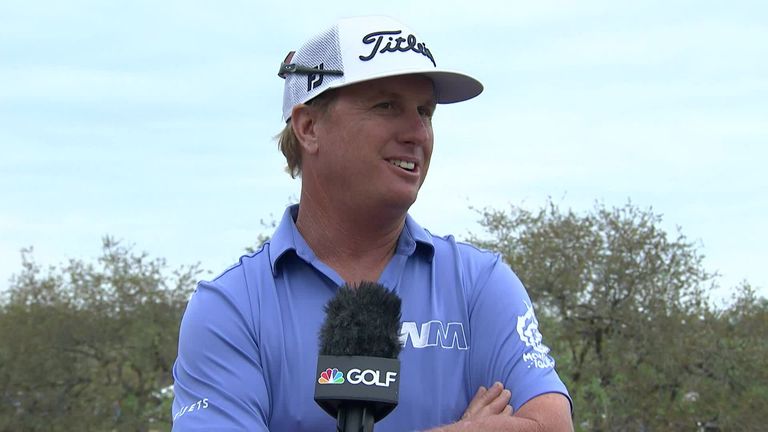 Tringale struggled alongside Wallace and Spieth in the final group - their start was delayed by around two-and-a-half hours by early-morning rain - and fell off the pace with three successive bogeys from the 11th on his way to a 73.

India's Anirban Lahiri is in fifth place on seven under after a 69, with American quartet Tom Hoge, who finished with sixth successive birdies for a 66 after starting on the 10th, Gary Woodland (67), Lucas Glover (70) and Matt Kuchar (70) tied for sixth on six under.

Rickie Fowler, who like Hoffman needs to win this week to earn a last-minute invite to The Masters, is tied for 21st place on three under.

Northern Ireland's Graeme McDowell moved up to two under thanks to a three-under 69, while Scotland's Martin Laird remained on one over following a level-par 72, with Ryder Cup captain Padraig Harrington (74) two over and Englishman Tom Lewis (74) three over.