The Masters: Justin Rose happy to still be in contention after 'difficult' third round

"You know, all the guys chasing at seven under are all capable of that little run that Hideki has had, so it's all up for grabs tomorrow." Watch Sunday's final round live on Sky Sports The Masters 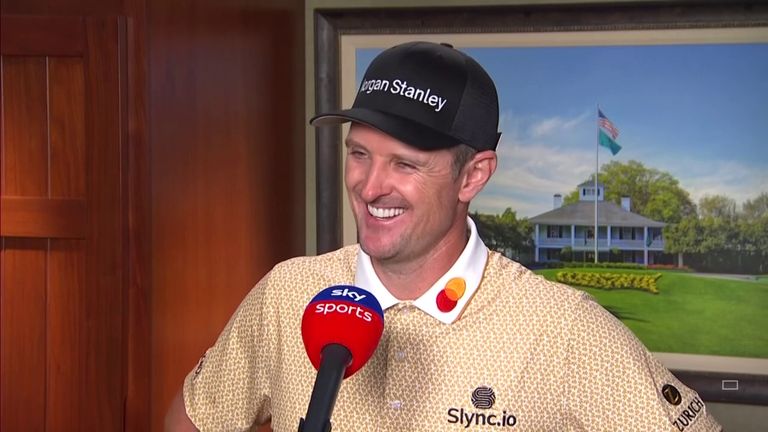 Justin Rose is confident he can reel in third-round leader Hideki Matsuyama, but he knows he needs a better performance on the final day to claim a first Masters title.

Rose had enjoyed the lead since making his astonishing charge on Thursday, picking up nine shots in 10 holes in an opening 65, staying ahead at halfway despite a second-round 72, but another level-par day leaves him four shots adrift of Matsuyama after 54 holes.

The two-time runner-up appeared likely to restore his commanding first-round advantage when he birdied the first two holes in his third round, but his flying start was undone by back-to-back bogeys at four and five.

A suspension of play for 78 minutes gave him time to regroup, but he was one of many to struggle to adjust to the softer, slower course conditions after the resumption, although he did manage to grind his way home and stay level par for the day.

At seven under for the tournament, Rose now finds himself four shots adrift of an inspired Matsuyama, who stormed home in 30 with an eagle and four birdies to match the Englishman's 65 of the first day.

"I didn't play well enough today, simple as that really," said Rose, who did well to scramble a par in near-darkness after a poor drive into the pines at the 18th. "I think all in all, to have a shot tomorrow, I'm delighted. I have that freedom to take a run at it, and of course I'd love to kind of stay with it just a little bit better.

"I've been playing with the lead the whole week, and obviously there's been an hour of golf where Hideki has moved out there in front. You know, all the guys chasing at seven under are all capable of that little run that Hideki has had, so it's all up for grabs tomorrow."

Rose was thankful there was just enough daylight to get his third round complete and avoid an early start on Sunday morning, while his brilliant par-save at the last was a boost for his confidence heading into the final round.

"To get it finished today was a huge bonus," he added. "I actually didn't think we had much chance, but they did a great job getting us back out there. I wasn't really sure if that's what I wanted at the time, but it proved to be a great decision.