England's Mel Reid, chasing a maiden major victory, posted an opening-round 67 to share the clubhouse lead with teenage amateur Megha Ganne on the opening day of the 76th US Open at The Olympic Club in San Francisco - watch throughout the week on Sky Sports Golf 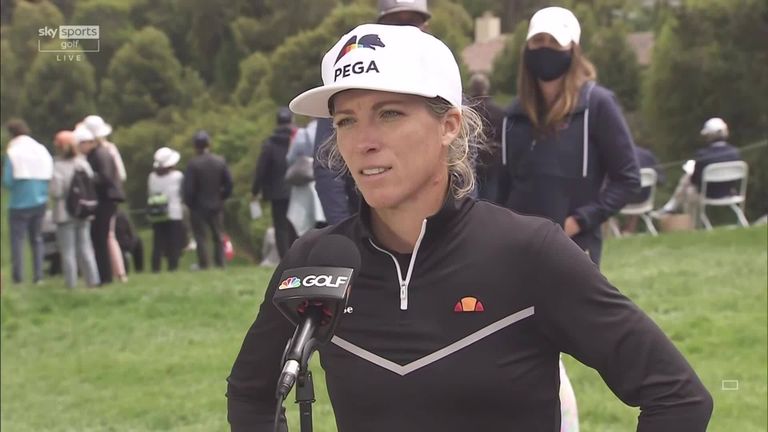 Mel Reid reflects on setting the clubhouse lead with an opening-round 67 at the US Women's Open and how a pre-tournament chat with Brooks Koepka helped with her game plan.

Mel Reid revealed a pre-tournament conversation with four-time major champion Brooks Koepka helped her share the early clubhouse lead at the US Open.

Reid mixed five birdies with a bogey to card a four-under 67 in foggy conditions and on a difficult layout at The Olympic Club in San Francisco, where most of the field were struggling to break par.

The 33-year-old shares the lead with 17-year-old amateur Megha Ganne, who led the way until a bogey at the 18th knocked her back into a tie.

Starting from the ninth hole, Reid opened with back-to-back birdies and added successive gains from the 15th, before cancelling out a bogey at the 18th by picking up a shot at the par-four seventh to set the clubhouse target.

"I didn't think that score was out there honestly," Reid said. "I had a pretty good game plan. It's probably the best I've had for a tournament. We had a game plan and stuck to it.

"If you're in trouble, just get it out, make bogey. I think the key here is to not take many risks the first two, three days, and I didn't do that. Very, very happy with the way we started, felt like I played very, very solid.

"Yeah, it's obviously day one. There's a long, long way to go, and if you don't pay attention, this golf course can really eat you up. Just need to stay focused. Whoever wins at the end of this is going to be really tired come Sunday."

Reid, who used to regularly play practice matches with Koepka at The Floridian until her move to Jacksonville at the end of 2020, paid tribute to the former world No 1 for the advice he offered her ahead of the second women's major of the year.

An opening round 67 from @melreidgolf 🔥

"I texted Brooks (Koepka) on Tuesday, we had a long conversation and then we FaceTimed for an hour on Tuesday night," Reid added. "He gave me a few things that he follows by in a major, so obviously appreciate his help.

"What he told me was, I thought, invaluable honestly, and it made me have a little bit different approach. That's why I feel like I prepared the best, and with my caddie, he was great today and we both agreed with the same game plan. Yeah, I'm just trying to be a bit more like Brooks."

Reid was one of 15 players to finish under par after the opening round, with Angel Yin posting a three-under 68 and Yuka Saso a further shot back.

World No 1 Jin Young Ko posted a one-under 70 with Marina Alex, Austin Ernst, Jennifer Kupcho and Jeongeun Lee6, while Charley Hull carded an opening-round 75 and Georgia Hall struggled to a six-over 77 despite birdieing three of her first four holes.