Collin Morikawa posted a six-under 66 to hold a one-shot lead after at a stormy Memorial Tournament, where play was suspended multiple times due to the threat of lightning; Rory McIlroy and Jordan Spieth only able to complete two holes of their opening rounds Collin Morikawa set the clubhouse target and sits top of the leaderboard after a weather-disrupted opening day at The Memorial.

The former PGA Champion mixed seven birdies with a lone bogey during his opening-round 66 at Muirfield Village in Ohio, taking him to six under and a shot clear of Adam Long.

Xander Schauffele was one of four players in the morning wave to card a four-under 68, while world No 2 Justin Thomas and defending champion Jon Rahm both started their weeks with opening-round 69s.

Play was halted for two hours just after 12.45pm local time (5.45pm BST) due to the threat of lightning and was suspended for a second time at 4.17pm (9.17pm), meaning all of the afternoon starters will have to return on Friday morning to complete their first rounds.

Morikawa, who won the Workday Charity Open at the same venue last summer, followed a 12-foot birdie at the 12th with back-to-back gains from the 14th before bogeying the 18th to turn in 34.

The 24-year-old converted from 10 feet at the first to start a run of three consecutive birdies and took advantage of the par-five fifth just before play was suspended for the first time, with Morikawa returning after the delay to finish with three pars and stay top of the leaderboard.

"It fits my eye off the tee a lot," Morikawa said about the course. "There's only a couple tee shots where I might not be able to hit my cut as well as I want to. If I keep it in the fairway, I feel like I'm hitting kind of a lot of 9-irons, 8-irons and 7-irons and that's kind of what I've based my game on the past couple years. 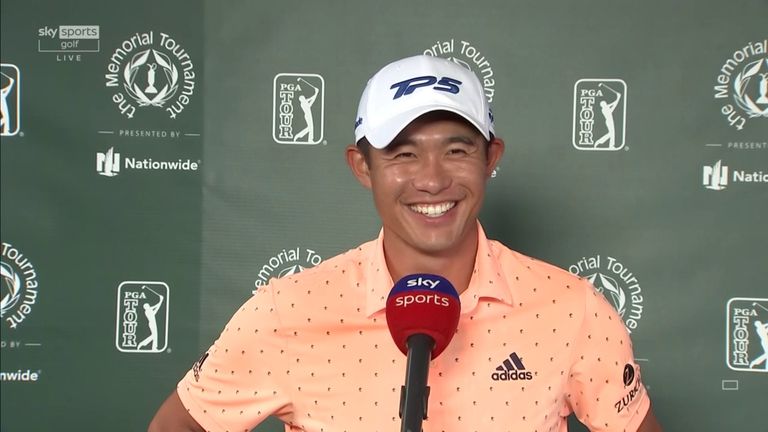 "When I'm able to put those irons in my hands, I feel like I can attack pins, I can be smart and give myself maybe some closer birdies than other guys can and obviously we rolled in a few today and just got to keep that up."

Long birdied four of his opening seven holes on his way to a five-under 67 and Schauffele was also two off the pace until he bogeyed his penultimate hole, leaving him alongside Bo Hoag, Nick Taylor and Spain's Rafa Cabrera Bello.

Thomas survived a disappointing putting display, where he missed three chances from inside five feet, to sign for an opening 69, with Rahm, Shane Lowry and Rickie Fowler among the other players four shots back.

Bryson DeChambeau was among the later starters and was two under after three holes of his round when play was stopped, while Jordan Spieth is in the group on one under and Rory McIlroy over par for his round after an opening-hole bogey.

Play had been due to restart for a third time at 6.30pm (11.30pm BST), only for the horn to sound again just as players returned to the course. PGA Tour officials suspended play for the day just over 10 minutes later, with the round set to continue at 7.30am (12.30pm) on Friday.

Watch The Memorial Tournament throughout the week live on Sky Sports. Live coverage continues on Friday with Featured Groups from 12.30pm on Sky Sports Golf.