Russell Henley is the clubhouse leader after a 67, with Louis Oosthuizen four under with two holes to complete after fog delayed the start of the US Open at Torrey Pines. Watch the day two action live on Sky Sports Golf from 3:30pm.

Jon Rahm and Brooks Koepka made ominous starts to the 121st US Open as Rory McIlroy ended a long opening day just three off the lead at Torrey Pines.

Rahm and McIlroy just managed to get their first rounds completed after the start of the tournament was delayed by 90 minutes due to fog, with Louis Oosthuizen tied at the top with clubhouse leader Russell Henley when play was suspended due to darkness.

Henley's 67 was the best of the morning wave, with 2018 Open champion Francesco Molinari making a welcome return to form with a 68, while Koepka gave himself a solid platform to contend for a third US Open title as he fired a two-under 69 - a score matched by Rahm in the late evening gloom.

McIlroy cruised to the turn in two under and produced one of the shots of the year when he pitched in for an unlikely birdie from thick rough at the seventh, but he carded three bogeys on the back nine before scampering up the 18th in fading light and closing with a birdie to return a 70, one better than playing-partner Dustin Johnson.

Henley, without a win in over four years, made six birdies as he set the early target just ahead of Molinari and Rafa Cabrera Bello, who was the only player to complete 18 holes without a bogey on a card featuring a lone birdie and a superb chip-in for eagle at the 18th.

Molinari mixed five birdies with two bogeys to eclipse older brother Edoardo, who fired a creditable 70, while Koepka put his ongoing feud with Bryson DeChambeau to the back of his mind as he raced to four under before slipping back with two bogeys over his final seven holes.

Koepka's score was matched by Xander Schauffele and Masters champion Hideki Matsuyama, whose 69 was four shots better than playing-partner DeChambeau, while Rahm beat the clock to join the tie for fifth as he looks to atone for his crushing disappointment at The Memorial, when he led by six after 54 holes before having to withdraw due to a positive test for Covid-19.

First day as it happened

But while Rahm and McIlroy managed to avoid an early alarm call on Friday morning, Oosthuizen was not so fortunate as he marked his ball on the eighth green when tied for the lead and will have a 35-foot birdie putt to contend with when he returns to the South Course.

Oosthuizen recovered from an early mistake at the 11th with a birdie at 12 and then three in a row from the 16th, and he picked up one more on the front nine while keeping further blemishes off his card to boost his hopes of a long-awaited first career win in the United States.

"I just enjoy playing really tough golf courses," said the 2010 Open champion. "I think somehow I focus a little bit better when I play those courses, knowing that the margin for error is really small. 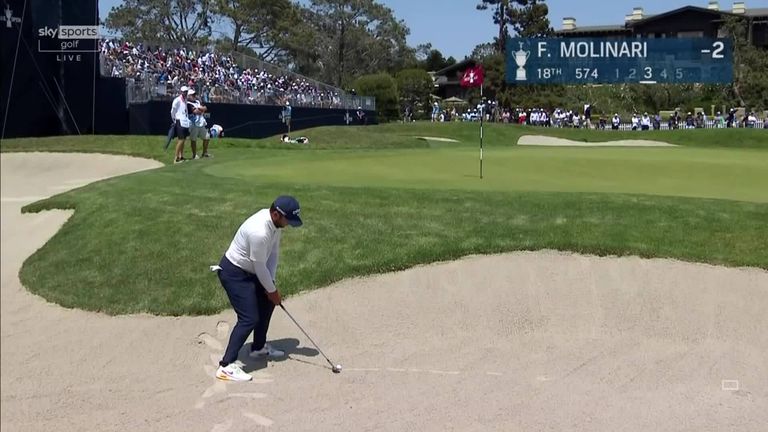 British Masters champion Richard Bland, making only his second appearance in the event at the age of 48, got to three under when he holed a huge putt at the 12th, but he then made back-to-back bogeys before a steady run of pars capped a 70 to match the earlier efforts of Tyrrell Hatton and Matt Fitzpatrick.

McIlroy was the last player to get into the house on one under when he defied the gloom to hole from eight feet for birdie at the last, making good on his vow to enjoy a better Thursday in a major following disappointing openers at the Masters (twice) and last month's PGA Championship.

"It was good," said the 2011 champion. "I got off to a really good start with a birdie at the first and I played well, I played solid. I didn't miss a green until the seventh hole and I was able to chip that in, which was a bonus.

"But that's the key around here, you can get away with some wayward shots off the tee, and I did today, but I was able to recover well and hit greens. And if you can just keep hitting greens out here that's the name of the game and I did that well.

"The birdie on 18 is awesome. I mean, that putt was like, 'I think it's straight, I'll hit it straight and we'll see'. But it was nice to get done, get an extra hour of sleep tonight and it was a bonus to birdie it as well."

World No 1 Johnson carded 16 pars, one birdie and a bogey in his steady 71, while DeChambeau made six bogeys - including three in a row from the 11th - before he produced a spirited finish with birdies at 14 and 18 getting him back to two over.

Much of the pre-tournament focus was on local hero Phil Mickelson's latest attempt to complete a career Grand Slam of majors, but the PGA champion struggled to a 75 the day after his 51st birthday and is likely to need a sub-par round on Friday just to make the halfway cut.

Oosthuizen is among 36 players who will complete their rounds - fog permitting - on Friday morning, with play set to resume at 6:50am local time, 2:50pm BST.