"The fans are fantastic here, they're just the best in golf," says 2017 Open champion Jordan Spieth, who defied a lack of competitive golf in recent weeks to fire a 65 at Royal St George's. 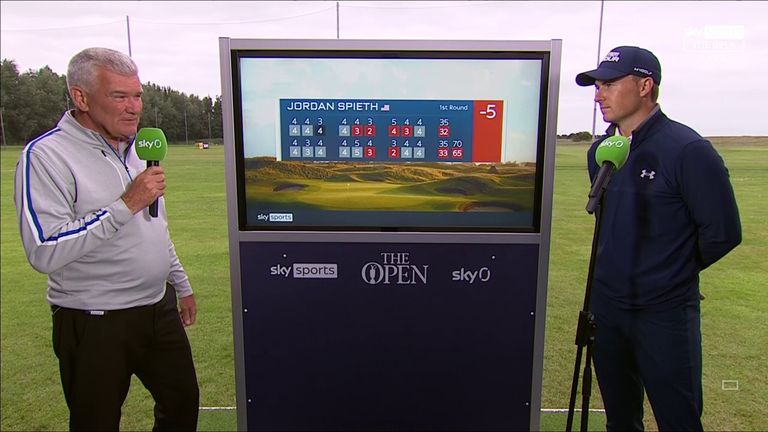 Jordan Spieth paid tribute to "the best fans in golf" after giving himself the ideal foundation to challenge for a second Open title with a first-round 65.

Spieth admitted he had some concerns heading into the final major of the year having not played any competitive golf since the US Open last month, and an early bogey at the third did little to quell those fears.

But the 2017 champion responded with four consecutive birdies from the fifth, and he picked up further shots at 15 and 16 to get to five under and into the clubhouse lead, although he was soon surpassed when 2010 winner Louis Oosthuizen came in with a 64.

The three-time major champion, who came close to dropping out of the world's top 100 before a tied for fourth at the Phoenix Open ignited a resurgence, has always embraced the complexities of links golf and clearly relished performing in front of bumper galleries.

"I've really loved this tournament," he said. "I've played well here, whether I've come here in form or not, and so last year missing being able to play this tournament was certainly something that I didn't want to do.

"Now we're back, and it feels the most normal of any tournament I think that we've played thus far relative to that same tournament in previous years pre-Covid-19. The fans are fantastic here, they're just the best in golf.

"They're very knowledgeable, and you always know where your ball is even if it's a blind shot. It was really great to have them back and have what feels like normalcy when we teed off on the first hole."

Spieth showed hints of competitive rust over the early stages of his round, but he insisted he was happy with his preparation coming into the Championship and has traditionally arrived at The Open after a break of two or three weeks.

"That was kind of my one concern, I think, coming in here," said Spieth when asked about his expectations given his lack of tournament golf since the US Open. "I felt pretty good about the work that I had done over the last say week and a half or so.

"But when you haven't played for a little while, you come into a difficult track, you can have a bit of rust early, and I was a little bit concerned about that. I think midway through the front nine today, turning under par was just big to feel like 'hey, we're in the thick of things'.

"There are some extra nerves when you're not coming off the week before, but I hit some really good shots early in the round today, which I think was important.

"I played the week before The Open in 2015, and then I think I was off at least two or three weeks every year since. I won at Birkdale and had a chance at Carnoustie.

"It just so happens in the schedule that I end up playing a lot in the spring with Dallas and Fort Worth, and now with the schedule shifted around with the PGA Championship in May, by the time the US Open is done I'm pretty gassed and looking for a little break.

"So I think it's more the break before it versus the preparation for here, but I'll certainly look into playing into The Open Championship going forward, thinking that it could be really good prep."

Spieth also did not read too much into playing the first two rounds with Branden Grace, who was grouped with Francesco Molinari for Thursday and Friday at Carnoustie and also played days one and two with Shane Lowry in 2019.

"I think that that's maybe not extremely uncommon," Spieth added. "I think that when you have a top 50, top 25 player in the world that Brandon Grace has been, he's going to be in some pairings with guys who are certainly capable of winning major championships, and it just so happened it was two years in a row.

"I did hear that ahead of time, though, which just made me laugh. I just didn't think much of it."