Sophia Popov ahead of her AIG Women's Open title defence at Carnoustie: "Being able to tee it up as defending champion is something that's very, very special and something I shouldn't take too lightly"

Sophia Popov is relishing the opportunity to tee it up as defending champion of the AIG Women’s Open at Carnoustie, a year on from her career-changing major victory.

The German arrives at the final women's major of the year as the highest-ranked European in the world rankings, having been outside the world's top 300 when she claimed a shock win in the 2020 contest at Royal Troon.

Popov has since impressed on the LPGA Tour, with a runner-up finish at the Bank of Hope LPGA Match Play one of three top-10s in 2021, with the 28-year-old also representing Germany earlier this month at the Olympics as part of a hectic summer schedule.

"Once you get on-site and you see your face everywhere and you realise, oh, my God, it's been a year now and this is the event that changed so much for me," Popov told the media on Tuesday. "I think up until last week, it was just a regular season and just been keep playing, keep playing.

"Then once I kind of set foot out here, it was like, okay, I'm coming here to truly enjoy this week, regardless of what happens. This is my sixth or seventh week on the road now, so obviously it's kind of the highlight of the summer. 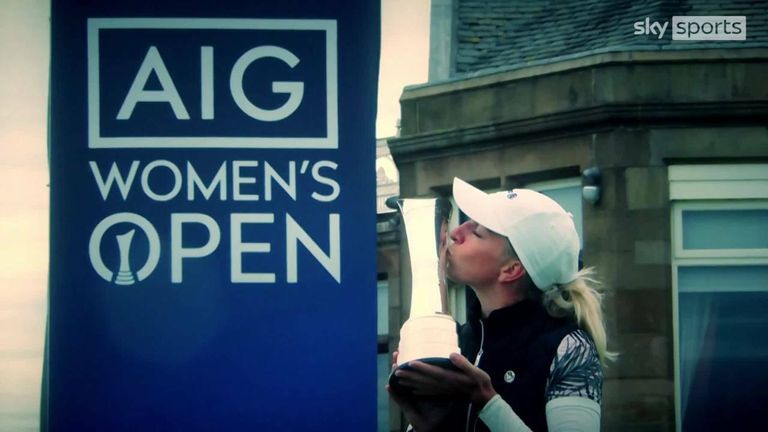 "Just [need to] really enjoy being out there, especially this week, just to take it all in, because I don't know what's going to happen this week and going forward. Being able to tee it up as defending champion is something that's very, very special and something I shouldn't take too lightly."

Popov's rapid rise over the past 12 months has also secured her a Solheim Cup debut next month in Ohio, with the former Junior Solheim Cup player looking forward to representing Team Europe for Catriona Matthew's side.

"It's very exciting," Popov added. "I think I might even mentally get ahead of myself a little bit, just really looking forward to that week [Solheim Cup] and the excitement of it always reminds me of all the great things that happened last year and this year.

"Last year I played well and I won the tournament [AIG Women's Open] but I had to back it up with some other finishes to make that Solheim Cup team. I did that pretty well throughout the end of last season and beginning of this season. Now I fully grasp the idea that I really belong on that team, and now I think I can really enjoy it and look forward to it."

Lydia Ko is among the contenders to add to her major tally, having followed a third-place finish at the Olympics by claiming a share of second at the Women's Scottish Open last week, although the former world No 1 insists she isn't thinking about a potential return to the top of the world rankings.

"I honestly haven't checked the Rolex Rankings in a really long time," Ko said. "I personally think that as long as I do a good job of what I can control, which is being committed, playing with conviction; those are the things that I can do.

"It would be great to be world No. 1 but to me, the rankings is not the more important thing, and for me, it's just to be in contention and for me to enjoy being out there on the golf course. That's more important to me. I feel like when I'm having fun, I'm able to play better golf."