Tony Finau makes an eagle and three birdies down the stretch and beats Cameron Smith in a playoff to end his five-year quest for a second PGA Tour title, emerging as a worthy winner of The Northern Trust. 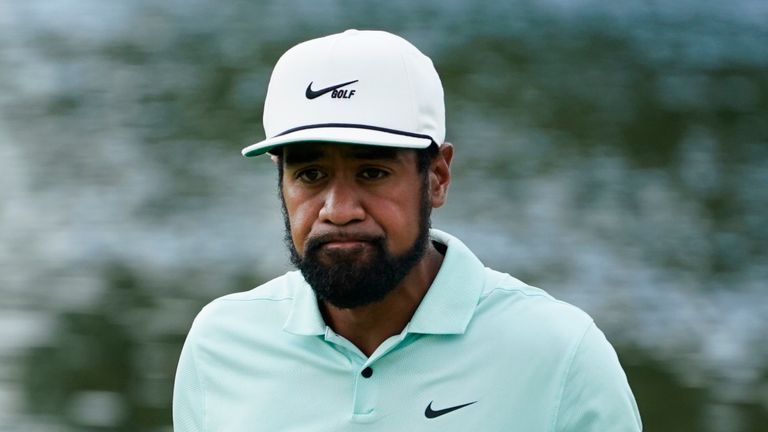 Tony Finau is finally a winner on the PGA Tour for the second time after he beat Cameron Smith in a playoff on the weather-delayed final day of The Northern Trust.

Finau has played 142 events since his breakthrough victory in Puerto Rico over five years ago and has notched 10 runner-up finishes, three of them coming in extra holes.

But he got over the line in New Jersey thanks to a superb back-nine charge and a helping hand from Smith, who carved his drive out-of-bounds on the first extra hole with Finau already in the middle of the fairway.

A solid six-iron to 20 feet put the outcome beyond any doubt with Smith still lining up his fifth shot from the fairway, and a two-putt par was plenty enough to win the first of this season's three FedExCup playoff events.

The prospect of a Finau triumph looked unlikely midway through the final round at Liberty National as he trailed Jon Rahm by three shots having been just one under par through 11 holes.

But a birdie at 12 was followed by a stunning second to three feet at the long 13th which Finau rapped in for eagle, and he picked up a bonus shot on the next green when he holed from 30 feet for a birdie-two.

Despite Finau's efforts, Rahm remained the firm favourite when he followed an outward 34 with birdies at the 12th and 13th to get to 20 under, but the Spaniard then tugged his drive at 15 into a fairway bunker and could not go at the green in two.

The world No 1 clipped a wedge to six feet but allowed too much break with his par putt, and Rahm then bladed a pitch 30 feet past the flag at the risk-reward 16th, where Smith made his third birdie of the back-nine as he continued to fight back into contention after a poor start.

Smith was struggling with his driver from the start and pulled one 40 yards left of his target at the sixth and into water, a mistake which led to a double-bogey six.

But the young Aussie, who missed a 12-foot putt for a 59 on Saturday afternoon, started his revival with a birdie at the eighth and looked to have fixed his problems with the big stick as he kept pace with the charging Finau.

Finau got into the clubhouse on 20 under having holed a clutch six-footer to complete a nice up-and-down from the sand at 18 for a 65, and with Rahm out-of-sorts down the stretch, Smith emerged as the man most likely to deny the luckless American once again.

Smith pulled level with a nerveless seven-footer for birdie at the 17th, and he gave himself a chance to win in regulation only to leave his 25-foot putt short, tapping in for a 67 before heading back to the 18th tee with Finau.

Despite not having missed a fairway since the 10th, Smith then made one of his worst swings of the week and watched in horror as his ball sailed towards the unknown, and he also blocked his second effort into trouble to ease the stress on his rival.

And it was a victory stroll that Finau admitted he has been dreaming about for longer than he cares to remember, and he believes win No 3 will not be long in arriving.

"I feel like it's been a long time coming but I also feel like you have to earn everything out here," he said. "Nothing's given to you and I was able to earn this win, and you know, hopefully the future continues to be bright.

"I'm playing some great golf. We've got two big tournaments in front of me, so I'm going to enjoy this one. I'm playing great golf. I feel like I can go on a run, so why not continue right on to next week.

"This one took everything I had because I knew I had to get to 20 under. I was chasing down the best player in the world. Jon is a good friend but I know what type of game he has, and he's not going to let up on a lead.

"So I knew I was going to have to catch him and eventually pass him, and Cam was playing well. I gave it everything I had. I hit a great putt on 17 I thought was going to go in it would have been nice to have a little cushion on 18 tee.

"But this is cool. I've been thinking about that walk up 18 for a long time. It's been years. It's nice to finally have that and now put this second win behind me.

"Nothing has come easy for me. I've lost in playoffs, taken second, third in, major championships. But I've persevered and that's the biggest key is I haven't given up on myself and on my team. Things are great and now to finally have this happen again, this is great for my family and for my career."