Nino Bertasio holds a two-shot lead over Thomas Pieters, Lucas Bjerregaard, Adri Arnaus and Mathieu Pavon in Vilamoura - watch the third round of the Portugal Masters live on Saturday from midday on Sky Sports Golf 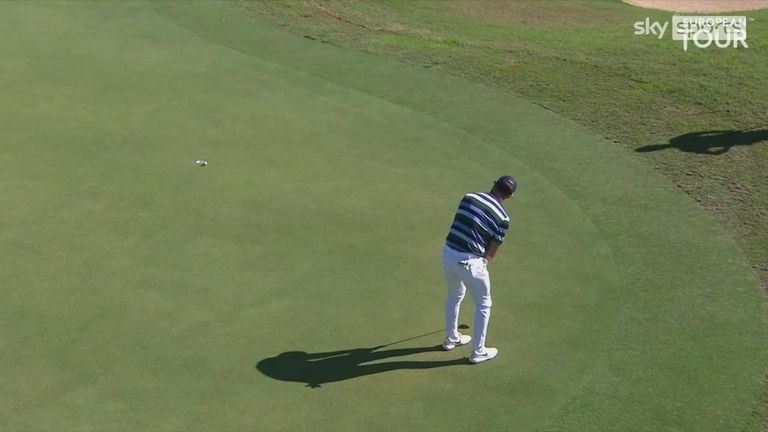 Nino Bertasio saw his lead halved to two shots at the halfway stage of the Portugal Masters, with Thomas Pieters among the players to move into contention.

Bertasio was unable to replicate his career-low 61 from the opening day at Dom Pedro Victoria Golf Course, mixing three birdies with a lone bogey on his way to a second-round 70.

The Italian heads into the weekend on 12 under and ahead of a four-way tie for second, with Pieters part of the chasing pack after firing four consecutive birdies on his back nine to help the former Ryder Cup star to a seven-under 64.

"I couldn't expect anything similar to yesterday," Bertasio said. "A solid day. I didn't make many putts, the greens were a bit bumpy towards the end. I made three birdies and they were basically inside two feet. I didn't make much out there, but I'll take it."

Adri Arnaus continued his bogey-free start to the week and Lucas Bjerregaard posted a blemish-free 64 to join Pieters and Mathieu Pavon on 10 under, while Callum Shinkwin heads the English contingent and sits three off the pace thanks to a second-round 67.

"It's a really good day when you don't drop any shots and have no bogeys on the card," Arnaus said. "I managed to save a few good pars but took advantage of the opportunities. I thought today wasn't so easy because the pins were quite tucked. We stuck to our game plan and we played well."

Sam Horsfield is on eight under and Oliver Wilson, the player who carded the first '59 round' in European Tour history at this event in 2018, is a further shot back alongside British Masters winner Richard Bland, Scotland's Grant Forrest and Malaysia's Gavin Green.

"I'm hobbling around a little bit," Bland said. "I've got a tear in my left knee. To be fair, I've been playing with it for most of the season but it's only really been bothering me on the walking side for the last four or five weeks. It's getting worse. I'm glad I've got six rounds of the year left to play."

Robert MacIntyre and Victory Perez both head into the weekend on three under, while Matt Wallace missed the cut after making a triple-bogey and double-bogey on his way to a five-over 76.

Watch the Portugal Masters throughout the weekend live on Sky Sports. Live coverage of the third round begins on Saturday from midday on Sky Sports Golf.