Ryder Cup star Viktor Hovland coasted to a successful defence of his World Wide Technology Championship title at Mayakoba, firing a closing 67 to win by four from a fast-finishing Carlos Ortiz

Viktor Hovland held off a spirited late challenge from Carlos Ortiz to become the first player to successfully defend the World Wide Technology Championship at Mayakoba.

Hovland had extended his lead to six shots on the back nine, although Ortiz whittled that down to three with a brilliant run of five birdies in six holes down the stretch.

But the young Norwegian always had enough in hand to cruise to the finish line and, despite a couple of errors down the stretch, a closing 67 was enough to secure a four-shot win - his third victory on the PGA Tour.

A career-best 62 had given Hovland a two-stroke lead overnight, and the 24-year-old followed a steady start with three birdies in five holes ahead of the turn before adding another at the 11th.

The European Ryder Cup star did drop shots at 12 and 15, but with Ortiz the only one of the chasing pack to apply any kind of pressure, Hovland's march to the title was hardy in doubt, with another gain at the 17th sealing the deal.

Hovland's winning score of 23 under par set a new tournament record, eclipsing 2018 champion by one shot, and the performance was all the more impressive considering he borrowed a driver from James Hahn after his was broken by Danny Lee on the range on Wednesday.

"It feels awesome," he said. "Obviously I felt like my game was in a good spot going into this week and I know this course fits my game really well, but there was some stuff that didn't quite go my way at the start of the week. It was nice to overcome those troubles!

"I was coming in with some high expectations, but obviously for it to end like this and win by four shots, it's been a cool week. Couldn't ask for it to go any different."

Hovland laughed off rumours that he had promised Hahn a 10 per cent cut of his winnings for lending him his back-up driver following the bizarre incident on Wednesday, when his decision to let Lee loose with his favourite club backfired and resulted in a shattered shaft.

The shaft in Hahn's driver was around half-an-inch shorter than Hovland is used to, but he was happy to trade distance for accuracy around one of the shortest layouts on the PGA Tour. 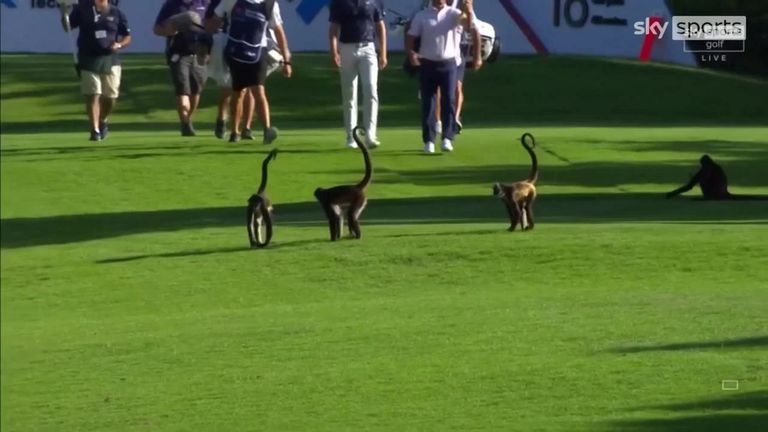 "It was really nice for James to borrow me his back-up, so I definitely owe him one," Hovland added. "We can negotiate something going forward.

"I'm definitely hitting it a little bit lower and a little shorter, so it's great for really fast places where you don't have to cover things. But I'd say most of the courses we play on the PGA Tour, there's usually a bunker at 300 or 310 where you really have to send one up in the air and try to cover the bunker. That's where that driver's not going to be as ideal as the one that I had before.

"I've just had my best year off the tee strokes gained with the one that I had before it broke, so I don't really see a point in changing that driver, but I could see myself using maybe this setup at certain courses, for sure."

Ortiz's closing 66 was good enough to earn him outright second on 19 under, the home player finishing a shot ahead of Justin Thomas after the world No 7 laboured to a disappointing 69.