Justin Thomas produced a dramatic final-round fightback to take advantage of a final-hole collapse by Mito Pereira and defeat Will Zalatoris in a play-off to win the PGA Championship.

Thomas equalled the biggest final-day comeback in tournament history as he jumped from seven behind to post a three-under 67 at Southern Hills, making four birdies over his last 10 holes to set the clubhouse target at five under.

Zalatoris carded a final-round 71 to match Thomas' target, with the pair progressing into a three-hole play-off when Pereira - who led throughout and took a one-shot advantage to the 72nd hole - found water off the final tee on his way to a costly double-bogey.

The play-off began at the par-five 13th, where the leading duo exchanged birdies, before Thomas edged ahead when he drove the par-four green at the 17th to set up a two-putt gain.

Zalatoris missed from eight feet as he failed to match Thomas' birdie on the second play-off hole and was unable to convert from distance on the third, played on the difficult 18th, as Thomas safely two-putted for a par to secure his first major title since winning the Wanamaker Trophy in 2017. 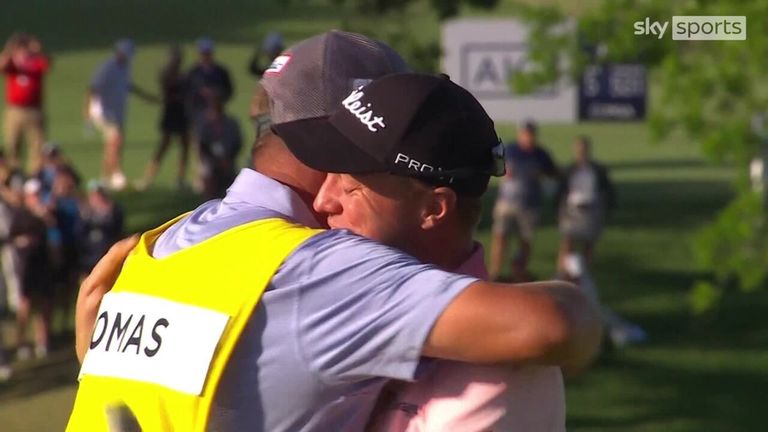 Pereira started the day three ahead and moved further clear when Matt Fitzpatrick bogeyed the first, only for the Chilean to miss from six feet to save par at the third and lose his outright advantage when Zalatoris posted back-to-back birdies from the fourth. 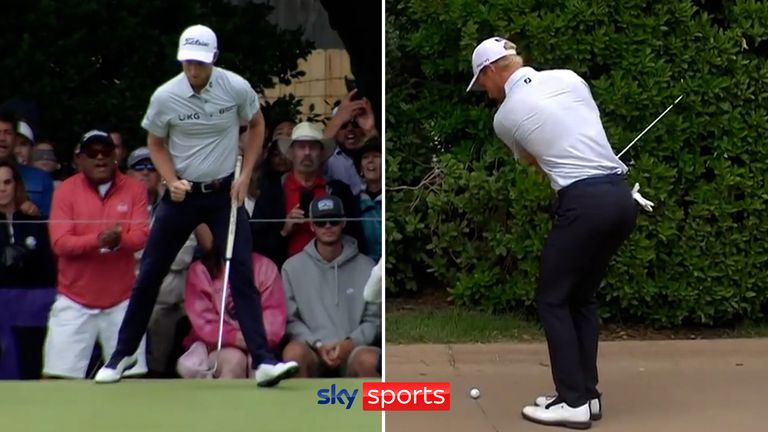 Fitzpatrick made a close-range birdie at the fourth but failed to take advantage at the par-three next, where Pereira picked up a shot to move two ahead, while Zalatoris produced a remarkable up and down from the cart path to scramble a bogey at the sixth after hitting his tee shot into bushes. 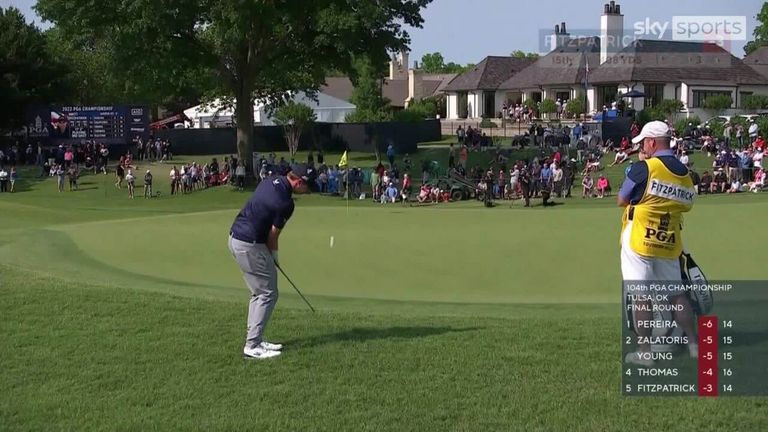 The delay dealing with Zalatoris' drop resulted in a long wait off the sixth tee for Fitzpatrick, who made bogey after finding water off the tee, as Pereira carded back-to-back bogeys from the seventh but holed a 15-footer to save par at the ninth and reach the turn one ahead.

Pereira battled to start his back nine with successive pars although he failed to convert from eight feet to save par at the 12th, while Fitzpatrick recorded back-to-back bogeys from the 10th, with Thomas following a monster birdie at the 11th by holing from 15 feet at the next to get within two.

Cameron Young briefly held a share of the lead until a bogey at the 14th dropped him to five under alongside Zalatoris, as a two-putt birdie from Pereira at the par-five 13th gave him a two-stroke cushion with five to play.

Pereira bogeyed the 14th and failed to convert from 10 feet at the next, where Fitzpatrick chipped in from the rough to get within two, while Thomas bounced back from missed birdie opportunities at the 13th and 15th to make one at the 17th to join the group in tied-second. 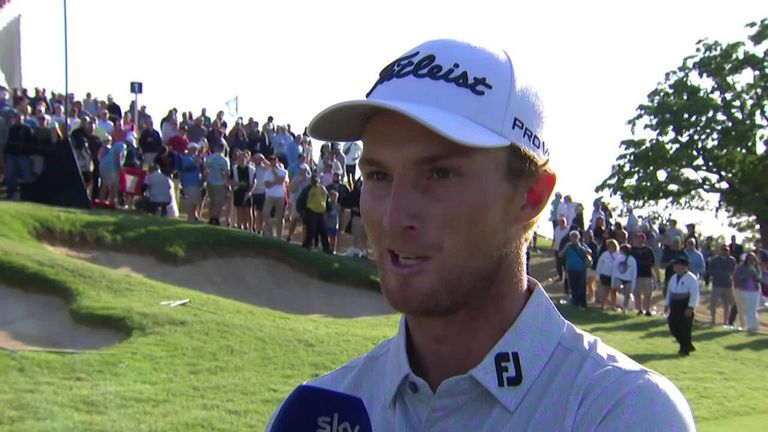 Young's hopes ended with a three-putt double-bogey at the par-four 16th and Fitzpatrick slipped out of contention when he bogeyed the 17th, as Thomas set the clubhouse target at five under after squandering a glorious birdie opportunity on the 72nd hole.

Zalatoris recovered from bogeying the 16th to birdie the next and hole an eight-footer to save par at the last, leaving him alongside Thomas, with the pair unexpectedly in a play-off when Pereira found water off the final tee on his way to a double-bogey six.

The late blunder from Pereira dropped the world No 100 into tied-third with Young, while Fitzpatrick's final-round 73 saw him finish tied-fifth with Tommy Fleetwood and Chris Kirk.

Rory McIlroy briefly charged up the leaderboard on the final afternoon with four consecutive birdies from the second, but bogeyed the next and dropped another shot on his penultimate hole to card a two-under 68 and finish in eighth place.

"You know what, major championship tests are so difficult, you could see a guy like Mito Pereira, who was on a winning score and if he'd have shot level par he would actually have won it easily in the end.

"It's difficult to win for the first time on the PGA Tour and then to have it be a major championship, it was a bit too much to ask for on this occasion.

"Justin Thomas was the class horse in the race in the end in what was a very exciting final round. For him to play the back nine at three under par with no mistakes, and then go three holes with Will Zalatoris and earn his second PGA Championship, fantastic for Justin Thomas.

"Even though he's been on our screens for a long time, he's still only 29. 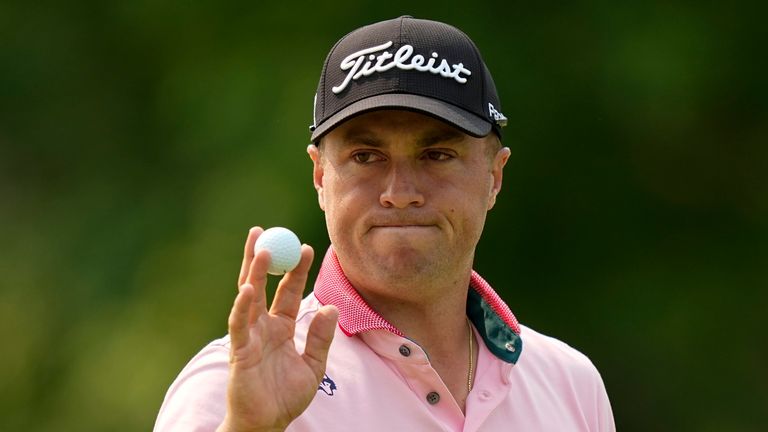 "Mito would have thought: 'If I play half decent today, I'm going to win'. That's pressure when you're not used to dealing with what's on the line.

"It's not so much that you've got to play a good round, of course that's important, but you sort of project: What will this mean for my career? What will it do for me in the next four-and-a-half hours? It's a huge thing to take on board.

"And it just proved for Mito to be too much on the day. But what he has done is teach himself, and he has the knowledge, that he's good enough to lead a major championship going into Sunday. That's what he takes forward, because he's a great talent.

"He's got all the bits and pieces you need, he just didn't have the final round he would have wanted."

"I think it was [a missed opportunity]. To start off like he did, 65 on day one, looking good.

"Instead of being outside the major runners and riders, he's right in there after a great first day, and I'm thinking: 'Come on Rory, this is it', but it just didn't work out.

"He didn't play well every single round. He played well again yesterday (Sunday), and actually if you'd have told him after five holes: You make one more birdie from here, you're going to a play-off, I don't think he would have believed you.

"But second and eighth in the first two majors of the year, it's not terrible."