China's Haotong Li continues to lead the BMW International Open after a five-under par second round; New Zealand's Ryan Fox is one shot behind in second, with Daan Huizing two shots back in third 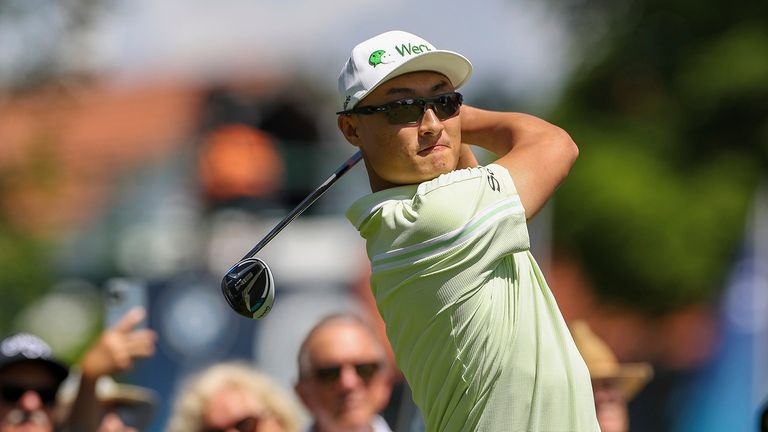 Haotong Li holds a one-shot lead at the halfway stage of the BMW International Open in Munich after shooting a five-under-par 67 on a weather-interrupted second day.

Li, who equalled the course record on the opening day, mixed two bogeys with five birdies and an eagle to stay ahead of the field.

He is a shot clear of New Zealand's Ryan Fox, who was eight under in his second round.

"To be honest, I didn't drive the ball as well as yesterday," said Li.

"My short game was OK. It depends when you get in the rough, the lie could be really bad, or it could be good. Sometimes you just need luck.

Fox completed his bogey-free round after a two-hour interruption because of lightning.

He eagled the sixth like Li did. When he resumed on the 11th hole, he birdied that, and finished his round with a sixth birdie to finish on 14 under par.

Two shots behind Fox on 12 under was Daan Huizing of the Netherlands, who carded a 69 after his opening 63.

Jordan Smith of England (66) and Thomas Pieters of Belgium (64) were tied for fourth on 11 under, four off the pace.

"I'm feeling great," he said. "I think I've only missed two cuts this year. It's been working, especially off the tee, I've improved a lot and it's back to where I was.

"I just need to keep grinding, keep improving and showing up. I was feeling the pressure on the last few holes and I think the weekend will be the same. Hopefully I can just play my golf and keep calm."

Kaymer calls for tours to find 'solution' over issues