Harrington's victory is his fourth on the PGA Tour Champions in 2022; Steven Alker topped the season-long standings and won the Charles Schwab Cup after a third-place finish 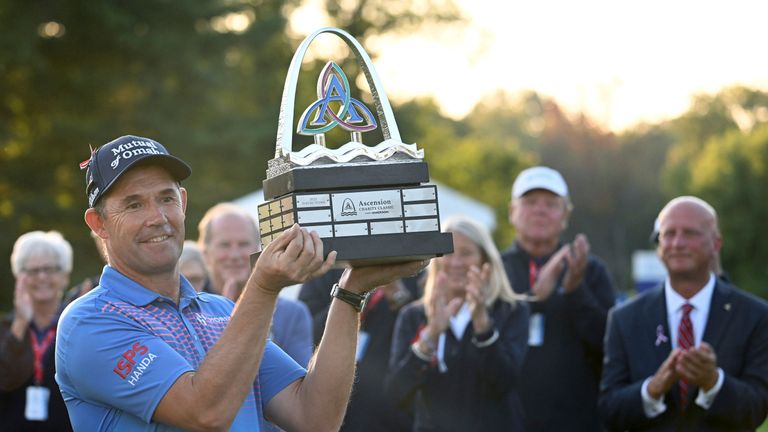 Padraig Harrington narrowly missed out on ending the PGA Tour Champions season top of the Schwab Cup rankings despite a seven-shot victory at the Charles Schwab Cup Championship.

The three-time major champion birdied three of his opening five holes on his way to a bogey-free 65 at Phoenix Country Club, adding three more in a five-hole stretch on his back nine to claim a dominant victory over closest challenger Alex Cejka.

Harrington ended the week on 27 under, matching the total set by Jack Nicklaus at the 1990 Kaulig Companies Championship, while the Irishman's 257 shots taken over the four days broke the PGA Tour Champions 72-hole scoring record.

The 51-year-old's victory wasn't enough to wrestle the Schwab Cup title from New Zealand's Steven Alker, who finished eight strokes back in third to stay top of the season-long standings.

"I came into this event knowing I had to win to give myself a chance in the Charles Schwab Cup, so that brings a certain amount of stress and focus," Harrington said. "To go out and win the tournament from that position, I'm happy with that.

"That brings a bit of confidence going forward. It's nice to win for a fourth time during the year. There have been several of us who have won four times, so yeah, it caps off a great year."

Alker, who shot his second consecutive 68 Sunday and finished on 19 under, came into the season finale requiring a top-five finish to win the Charles Schwab Cup in his first full season.

"It's not like he's just come flash in the pan at the end of the year and won a couple of events and all of a sudden won the Schwab Cup," Harrington added. "The pressure's been on him right from the start of the year all the way through.

"He had a lead and several of us were catching him all year. It's very impressive that he's not just held on, but he's won in style."

Miguel Angel Jimenez ended the week on 16 under and tied-fourth with Lee Janzen and Stephen Ames, with Retief Goosen a further two strokes back in seventh place.