Melissa Reid believes Suzann Pettersen was wrong not to award Alison Lee her putt in the fourballs and feels the incident affected Europe's bid for a third consecutive Solheim Cup victory.

Davies: US boosted by 'injustice

Pettersen came in for intense criticism after denying she and team-mate Charley Hull had conceded an 18-inch putt on the penultimate hole of their fourball match on Sunday morning after America's Lee had picked up her ball.

Lee mistakenly believed her 16-inch putt had been conceded by her opponents, leaving the referee no choice but to award the hole to the Europeans.

The Norweigan was initially adamant about the hole staying with the hosts and although she has since apologised for her lack of sportsmanship, Reid feels Pettersen made the wrong decision.

Speaking to Sky Sports News HQ, Reid said: "It's confusion between both sides and do you do the sporting thing and give a half? In my opinion I think that should have been done, but she (Pettersen) didn't.

"She thought she was doing the right thing for the team. She's gained a lot of criticism which I understand, but Suzann was just blinkered and I think she just completely lost perspective of the bigger picture.

"It's a clear mistake from Alison Lee. Looking back now I think she would have done things very differently, but Suzann's a fierce competitor and I just think she completely lost perspective of things. 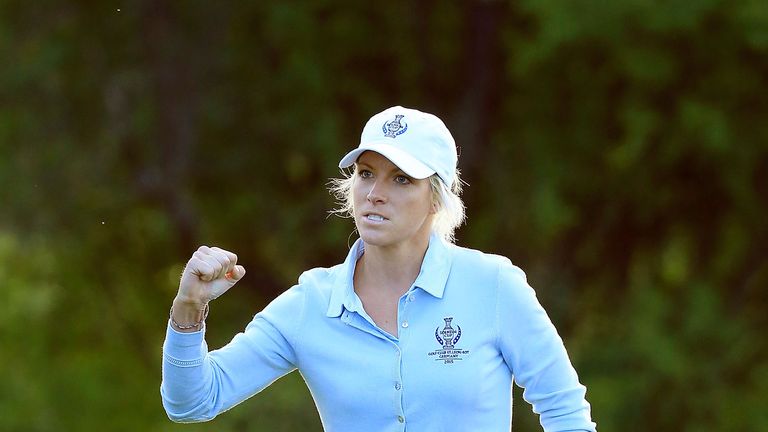 "Suzann's a fierce competitor and I just think she completely lost perspective of things."

A 2up victory in the final fourball gave the hosts a 10-6 lead heading in to the Sunday singles, before the USA fought back to snatch a dramatic win and deny Europe a third straight victory.

Europe had only needed four points from the 12 matches to retain the title they won so convincingly in Colorado two years earlier, but Reid admits the incident earlier in the morning played a pivotal role in the American recovery.

"It was difficult because we were in a lose-lose situation then," the 28-year-old, who claimed 3.5 points from 4 matches, added. "If we'd have won the cup back we'd have had bad press and if we lose it we've still got bad press.

"Charley (Hull) was incredibly upset after the singles matches and I think it slightly affected her. If I'm being completely honest I think it affected Suzann as well.

"Do I think it helped them win? Of course it did. It would have helped us win if it was in our situation.

"The Americans had more fire in their belly than what they already had. They're amazing golfers, the best in the world and we didn't need to give them any more reason to beat us than they already had.

"They came out more determined; they fought their hearts out and beat us on the last day. For us not to get four points from 12 singles is not good enough, but they played great and thoroughly deserved the win."