"Very expensive" mistake from Bryson DeChambeau after he flew home to Dallas on Friday thinking he had missed the cut at the Wells Fargo Championship, and he had to scramble to get back to Charlotte after scraping into the weekend. 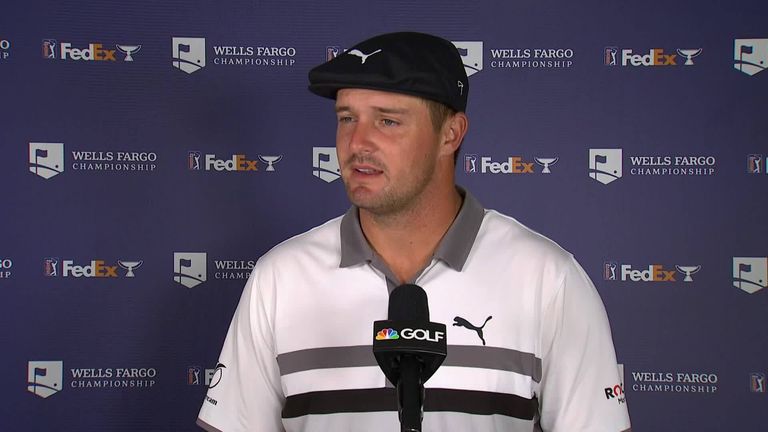 Bryson DeChambeau explains a bizarre 24 hours after firing a third-round 68 at the Wells Fargo Championship, just a few hours after he had flown home thinking he had missed the cut!

Bryson DeChambeau admitted he learned an expensive lesson after flying home to Dallas in the mistaken belief that he had missed the cut at the Wells Fargo Championship.

DeChambeau was certain his tournament was over after he endured a tough finish to his second round, running up a triple-bogey eight at the seventh - his 16th - to slip to three over par and at least two shots adrift of the projected cut at the time.

The US Open champion felt he needed a birdie, birdie finish to make the weekend, and although he chipped in for one at the eighth, he missed a good chance at the ninth and headed straight to the airport in Charlotte to head back to his house, a three-hour flight away.

He posted images of himself working out in his garage gym as the realisation dawned that tougher conditions at Quail Hollow had adversely affected the scoring, and DeChambeau's two-over score proved enough to make the cut on the number.

"I made triple on seven and then chipped in on eighth for birdie, and I thought I had to make birdie on the last and I missed the putt, so I thought there's no way I'm making it," he said after a third-round 68, which included a closing double-bogey following some bunker trouble at the last.

"Sure enough, conditions kept getting worse and by the time I landed I was in, 64th or 63rd or whatever. It was funny. We did a lot of scrambling last night to get back. One of the scenarios was turning right back around, but the crew couldn't refuel and their hours were out.

"So we tried to get a new crew and it just didn't work out. So we're like, 'Well, let's just go in the morning'. So I left at 2:45am on a flight and I got here at 6:20am, drove 30 minutes to the golf course, put on my clothes in the locker room and headed out to the putting green. I did get a workout last night, though!"

DeChambeau admitted it had been an expensive waste of two private flights that had also rendered him "very tired" when he began his third round, but he was delighted with how he responded.

"Way too expensive," he added. "But the thing is, I have a chance to go make a good cheque this week and I think that would offset it. So if I was to not come back and withdraw, lose world ranking points and all that, I had to incur the cost. It's my fault.

"I was very tired. This morning was not easy. But, for whatever reason, I just feel like the more weird things happen to me, the greater my resolve sometimes can be and today was a case of that. I got a little unlucky on 18, but other than that, you know, I played a great round of golf today. I'm very pleased.