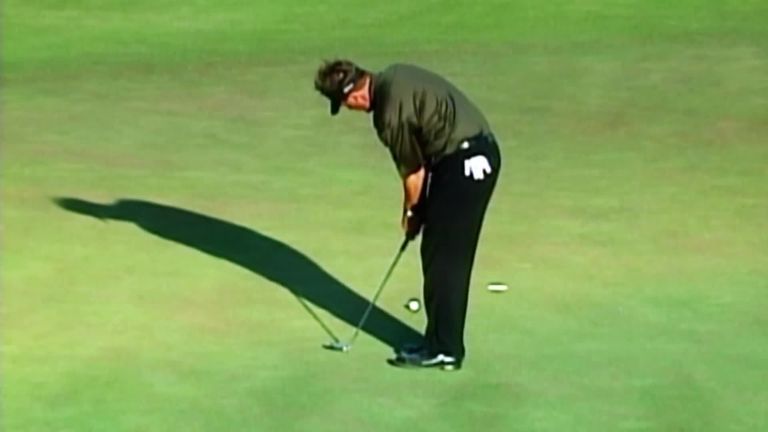 Phil Mickelson has been a regular US Open bridesmaid over the years.

The left-hander may have three Masters wins, a PGA Championship title and an Open Championship victory, but he has suffered a number of near-misses in his quest to land his home national championship.

Ahead of this year's major, where Mickelson has another chance to complete the career Grand Slam - a month on from becoming the oldest major winner in history - we look back at his six runner-up finishes at the US Open...

Mickelson held a one-shot lead with three holes to play and had a six-foot par putt on the 16th hole, while Payne Stewart was 25 feet away from par.

Stewart made his putt and Mickelson missed his to leave the pair level. Stewart took the lead with a short birdie on the 17th, then famously won the US Open with a 15-foot par putt on the final hole.

Mickelson, five shots behind eventual winner Tiger Woods at the start of the final round, birdied the par-five 13th to get within two shots of the lead.

Woods responded with a birdie on the same hole, and Mickelson's challenge effectively ended on the 16th when his tee shot found the rough and he made bogey.

Two years later, Phil was tied for the lead on the 17th hole when he hit into a bunker, blasted out to within five feet and three-putted for double bogey.

"It was like being in a morgue walking up the 18th," said Fred Funk, who was paired with him that day. Retief Goosen scooped the title.

Mickelson’s most crushing blow at the US Open came in 2006 after a final-hole meltdown. Leading by one on the last, his tee shot clattered off a corporate tent.

The bigger mistake was going for the green with a three-iron and hitting a tree. His third shot plugged in the bunker, before his fourth shot raced across the green.

He made double-bogey and lost by one to Geoff Ogilvy. There was Mickelson, crouched on the green, hands cupped over his head. "I am such an idiot," he said.

Mickelson was tied for the lead with four holes to play but two missed short par putts on the 15th and 17th holes cost him dear.

Another US Open bid over, Mickelson was walking up to the 18th green when playing partner Hunter Mahan, who had just as good a chance to win that day, began applauding, and thousands joined him. Lucas Glover landed his maiden major.

Mickelson was playing alongside Mahan on the final day again in 2013 when he fell narrowly short for a sixth time.

He twice made bogey with a wedge in his hand on the back nine and his last hope was to chip in from 40 yards to force a play-off with champion Justin Rose, but he failed to do so.

"I looked at him and said, 'Good try, Phil'. You can only do what you can do," Mahan said afterwards. "At some point, you've got to get a bounce or two and make a putt. I think he wants to win that tournament more than anything."