Storylines from an eventful November on the PGA Tour, where Tony Finau signed off a career-defining year in style and Adam Svensson enjoyed a breakthrough victory 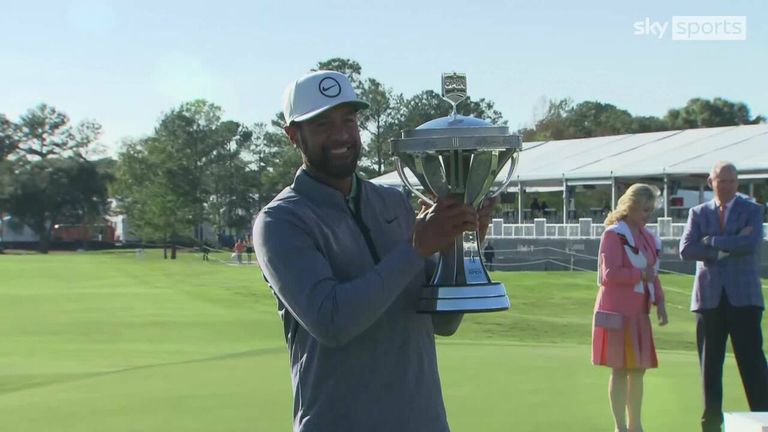 It's officially Tony Finau's world. The rest of us are just living in it.

The 33-year-old continued his winning ways last month at the Cadence Bank Houston Open, steamrolling the competition to secure a four-shot victory. It was his fourth PGA Tour victory over his last 30 starts after winning just once in his first 185 tournaments.

"This is definitely the most all parts of my game have been clicking, but I would say I've played a lot of good golf for a while," Finau said afterwards. "I didn't have a lot of wins to show for it, but I've pieced together a game and that's what you have to do out here."

"I feel like I've been a very solid player for a long time, but it's exciting for me that I'm getting better and that's all I can ask of myself is try and get better in the areas that I really need to," he added. "And then remember why you are where you are. I think I don't go too far away from the DNA of my game and how I see the game and I think I'm kind of bearing the fruits of how I see the game now and I'm able to hit the shots that I can see, which is pretty cool."

The DNA of Finau's game has been easy to identify - putting and driving. Simple enough, right?

"So you combine those two and you can get kind of a runaway win like I had. It's very encouraging for me as I move forward throughout the season."

While it may technically not have been his best week driving the ball, it was certainly a career-moment on the greens. Finau gained +1.98 strokes putting per round, the most per round of any PGA Tour event in his career.

How rare and deadly is that combination? Consider this: There have been 639 stroke play events since The Players in 2008 and only once over the first 603 events was there a winner to lead the field in both Driving Accuracy and Greens in Regulation - D.A. Points at the 2017 Puerto Rico Open.

However, in the last 36 events, two players have accomplished the feat - Finau in Houston and Sepp Straka at the Honda Classic.

"This was a special week," Finau said. "You know, I won this golf tournament from start to finish. I don't know if I've done that in my career, maybe at Rocket Mortgage, but to have played that well for four straight days, that's what it's all about and all the hard work is starting to pay off, which is fun."

And while winning may now be a habit for Finau, it's still a new experience for young Canadian Adam Svensson, who earned his first career PGA Tour victory at The RSM Classic, the PGA Tour's final FedExCup event of the year.

The 28-year-old, who won twice in 2021 on the Korn Ferry Tour to secure status, fired a bogey-free, six-under 64 to edge Sahith Theegala, Brian Harman and Callum Tarren by to strokes. He became the second Canadian to win on Tour this season after Mackenzie Hughes won the Sanderson Farms Championship in October.

But Svensson made a furious rally, going 19 under over his next 54 holes to secure the victory, the third-lowest total score to par since 1983 by a Tour winner following an opening round over par. He did so thanks in part to the +4.24 strokes he gained putting during the final round, the best mark of his career and third-most by a winner in the final round over the last four years.

"I was very frustrated. I just knew I had to just keep doing what I was doing," he said. "I flushed it on Thursday and I just got nothing out of my round, and going into Friday I just was grinding. I don't even know, I was putting great, hitting it great and I just kept hitting the fairway, hitting it on the green and just kept doing what I'm doing."