South African youngster Garrick Higgo collected his third European Tour title in just 26 starts with a closing 64, including his first ace, earning him a six-shot victory at the Canary Islands Championship in Tenerife 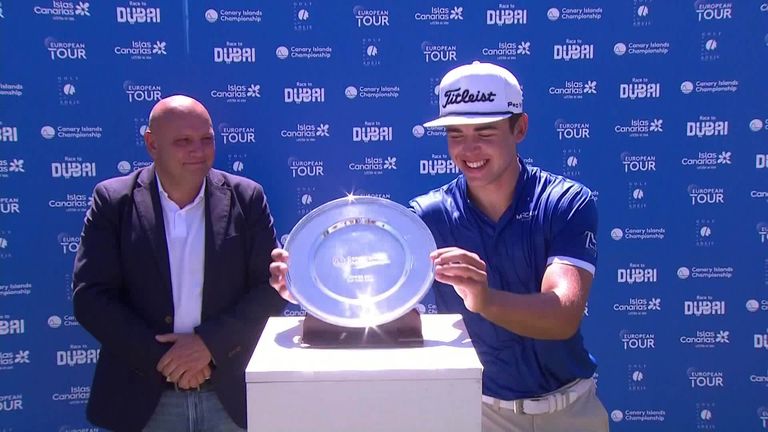 The best shots from the final round of the Canary Islands Swing in Tenerife, where Garrick Higgo fired a hole-in-one on his way to his second win of the Swing.

Garrick Higgo was in a class of his own as he enjoyed his first professional hole-in-one and a crushing six-shot victory at the Canary Islands Championship.

Higgo lifted his second European Tour title in Gran Canaria last month, and he only had a 14-day wait for his third as he completed a Canary Islands double in memorable style at Golf Costa Adeje in Tenerife.

The left-hander was two clear of the field overnight, and he had consolidated his advantage with three birdies over the first six holes before his moment of perfection at the short seventh, his nine-iron pitching just short of the pin, 166 yards away, and hopping into the cup for an ace.

That lifted the South African six shots ahead of the chasing pack, and he added another birdie on the eighth before picking up two more on 11 and 12 to effectively ensure a procession to victory over the final third of his tournament.

A bogey at 16 scarcely mattered as Higgo already had plenty in hand to coast to the finish line, with pars at 17 and 18 capping his second 64 of the weekend and a winning score of 27 under par.

Higgo, who turned professional barely two years ago, now has three European Tour victories in just 26 starts - a record for a South African on Tour - and he was an astonishing 68 under par for his 12 rounds in the Canary Islands Swing.

"Jeez, it's amazing," said Higgo, who has leapt to fifth on the Race to Dubai. "I'm just really happy and thankful. It's not easy to lead, the other day was my first time and in this game anything can happen."

The best shots from the final round of the Canary Islands Swing in Tenerife, where Garrick Higgo fired a hole-in-one on his way to his second win of the Swing.

The 21-year-old also admitted he had Ernie Els' record winning score of 29 under par in his sights, but his dropped shot at the 16th put paid to him sending another European Tour record tumbling.

"I was trying to shoot 30 under," he added. "It's unreal, I played so well today. I hit the ball very nicely so it was a lot less stressful than the last time because I was hitting it a lot better. I can't believe it happened so quickly again but my game has been good so I can believe it as well.

"I've been working really hard, a lot of little things, and I've also accepted what works for me and stuck with that, I think that's been a big thing, and not if I don't play as well look for something. I'm just going to try and keep going.

"I think I can go as high as I want to, the way I'm playing I can do a lot of good things."

Australian Maverick Antcliff birdied the last to complete a closing 65 and win the race for second place ahead of Tapio Pulkkanen, while Ireland's Niall Kearney soared 33 places up the leaderboard with a brilliant 61, including nine birdies and one eagle.

Kearney's late surge earned him a share of fourth place with last week's champion, Dean Burmester, with Andrew 'Beef' Johnston making a welcome appearance in the top five for the first time since the Celtic Classic last August.