In the second group out at 7.20am, Hill carded a bogey-free 63 to finish a shot ahead of Northern Ireland's Jonathan Caldwell; Ross Fisher, Chase Hanna and Robin Sciot-Siegrist all two behind - watch on Friday from 12.30pm on Sky Sports Golf. 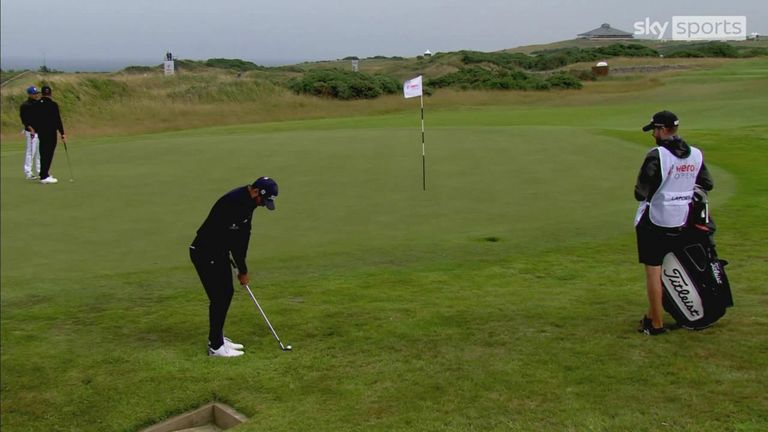 Calum Hill made the most of the early-morning conditions to jump into a one-shot lead on home soil at Hero Open.

Hill - one of 17 Scots in action at Fairmont St Andrews - carded nine birdies on his way to a bogey-free 63, before strengthening winds and heavy rain made for much tougher scoring for the later starters.

Jonathan Caldwell is a shot off the pace in second spot after an eight-under 64, while a blemish-free 65 lifted Ross Fisher into a share of third alongside American Chase Hunna and France's Robin Sciot-Siegrist.

"We got the best part of (the weather) 100 per cent," Hill said. "Our front nine was relatively calm, probably half a club wind, then back nine picked up. We got three quarters of our day in quite pleasant conditions, I think it's just getting worse from here - we took advantage."

Going out in the second group of the day off the tenth tee, Hill holed a 15-footer at the 12th for the first of four consecutive birdies and added another from close range at the par-five 18th to turn in 31.

A course record and career best round on the European Tour 🎤#HeroOpen pic.twitter.com/AFpJZG4oE6

Hill recovered from a wayward tee shot at the first to make a 15-footer to save par and maintain his blemish-free card, with a birdie at the third followed by three more in a row from the sixth to take him to top spot.

Caldwell made his charge up the leaderboard after making three straight birdies from the third, rolling in an eagle at the driveable seventh and picking up another shot on his penultimate hole, while Sciot-Siegrist got within one of the lead until a bogey at the par-four 16th.

"Delighted, especially with the recent form," Caldwell said. "It hasn't been so good. Delighted that a bit of the work I've done over the last week or so with my coach at home is paying off. Hopefully I can keep going forward."

Chris Paisley birdied two of his last three holes to stays within three of the lead, while Berry Henson produced the standout performance of the afternoon wave as he posted a five-under 67.

Andy Sullivan - the highest-ranked player in the field - dropped three shots over the final three holes to slip into the group on one over, while Daniel van Tonder - the only other player inside the world's top 100 - is a further shot off the lead.