By Ali Stafford at Wentworth 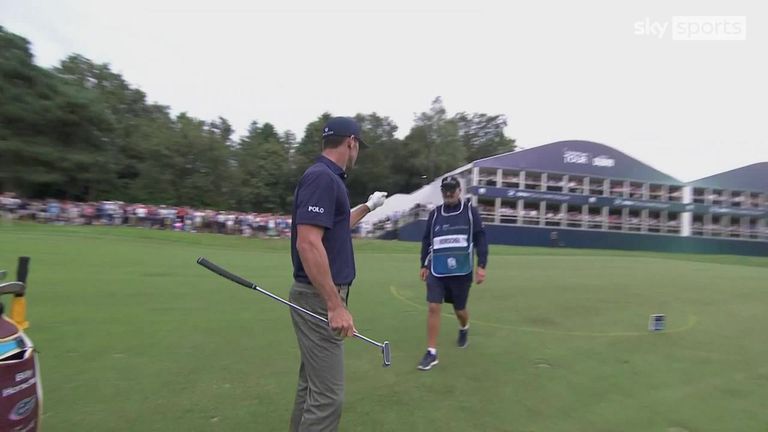 Billy Horschel secured his maiden Rolex Series title after snatching a one-shot victory in a thrilling final round at the BMW PGA Championship.

The American made a tap-in birdie at the par-five last to close a bogey-free 65 at Wentworth and finish a shot ahead of Laurie Canter, Jamie Donaldson and Kiradech Aphibarnrat.

Lee Westwood secured a record-equalling 11th Ryder Cup appearance despite a closing 77, as Shane Lowry - requiring a top-eight finish - dropped out of the automatic places after a final-round 71.

Aphibarnrat started the day four behind but charged up the leaderboard by holing from 10 feet at the first and posting four straight birdies from the fourth, with the four-time European Tour winner then squandering further birdie opportunities from inside eight feet over the next two holes.

Horschel made three birdies in a four-hole stretch from the third to briefly move alongside Aphibarnrat on 15 under, only for the Thai player to roll in a 25-foot birdie at the 11th and make a 20-foot eagle at the par-five next to go eight under for the round and three clear.

Canter had fallen down the leaderboard after bogeying the first and cancelling out his birdie at the next by dropping a shot at the third, before responding with four birdies in five holes and then adding another from three feet at the tenth to get within one.

Aphibarnrat holed a 15-footer to save par at the 15th and converted from 10 feet at the 16th for another birdie, putting Alex Noren's course record of 62 under threat, as Horschel stayed in touch with back-to-back gains from the 11th and Canter birdied the 12th to keep his hopes alive.

The tournament was blown open when Aphibarnrat escaped with just a bogey after hitting his approach into the bushes at the par-five 17th and then could make par at the last, seeing him set the target at 18 under, with Horschel making an eight-foot birdie at the 15th to make it a three-way tie.

Donaldson made it a quartet at the top when he followed a close-range birdie at the 17th with a two-putt gain at the par-five last, only for Horschel to break clear of the pack after firing his third shot at the 18th to inside two feet and set up a winning birdie.

Canter had a chance to also get to 19 under with a final-hole birdie, only for the Englishman to narrowly miss the target from 20 feet and make Horschel just the second American winner of the BMW PGA Championship in the tournament's history.