Richie Ramsay, who narrowly missed out on victory at the Betfred British Masters earlier this season, secured a fourth DP World Tour title and first since 2015; Scot finished on 14 under and one ahead of Paul Waring Richie Ramsay ended a seven-year winless run on the DP World Tour by snatching a dramatic victory at the Cazoo Classic.

The world No 329 produced a brilliant finish on an enthralling final day at Hillside GC, birdieing three of his last five holes to post a final-round 69 and claim a first victory since the 2015 Trophee Hassan II.

Ramsay's fast finish saw him edge ahead of home favourite Paul Waring, who set the clubhouse target at 13 under after a two-under 70, while overnight leader Julien Guerrier slipped into a share of third after throwing away a three-stroke victory over the closing stretch. 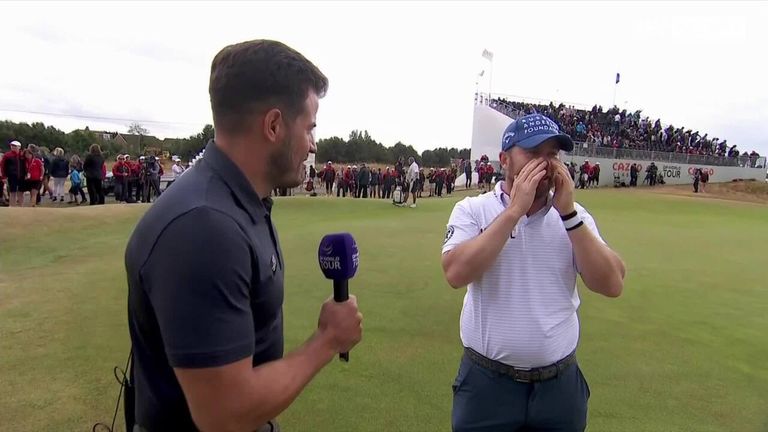 "The biggest thing for me was I made a promise to my daughter, and I don't break promises to her," Ramsay said. "I said I would get a trophy and this one's for here. It feels unbelievable."

Guerrier, starting the day one ahead, extended his advantage by holing a remarkable 60-foot birdie at the par-three fourth and getting up and down from the sand to birdie the par-five next.

The Frenchman rolled in from 15 feet to birdie the ninth and reach the turn in 33, with Guerrier three ahead until he saw his round begin to unravel with a three-putt bogey from 25 feet at the 13th.

Another three-putt from 50 feet at the 15th dropped Guerrier back into a share of the lead when Ramsay made back-to-back birdies from the 14th, while Waring posting a tap-in birdie at the 17th to make it a three-way tie at the top on 13 under.

Ramsay edged ahead when he made a close-range birdie on the penultimate hole, where Guerrier fell two behind after a wayward tee shot left him hacking out of the trees and making bogey.

The Scot found the rough off the 18th tee but gauged out to just short of the putting surface, before two-putting from off the green to secure a winning par and spark wild celebrations on the final green. 2019 champion Marcus Kinhult finished in tied-third after ending his final-round 67 with a bogey, with Scotland's Grant Forrest also in the group two strokes back thanks to a two-under 70.

A bogey-free 69 lifted Andy Sullivan into a share of eighth with Jens Dantorp and Angel Hidalgo, while top-seed Robert MacIntyre had to settle for tied-20th as he stuttered to a one-over 73.

The DP World Tour's UK swing continues next week with the Hero Open, held at Fairmont St Andrews, with coverage live on Thursday from midday on Sky Sports Golf.