Italian Open: Matt Fitzpatrick leads by one going into final day at the Marco Simone Golf and Country Club

US Open champion Matt Fitzpatrick closed his third-round 69 with a birdie to lead on his own ahead of Rory McIlroy and Aaron Rai; watch the final round of the DP World Tour's DS Automobiles Italian Open - live on Sky Sports Golf from 12:30pm on Sunday 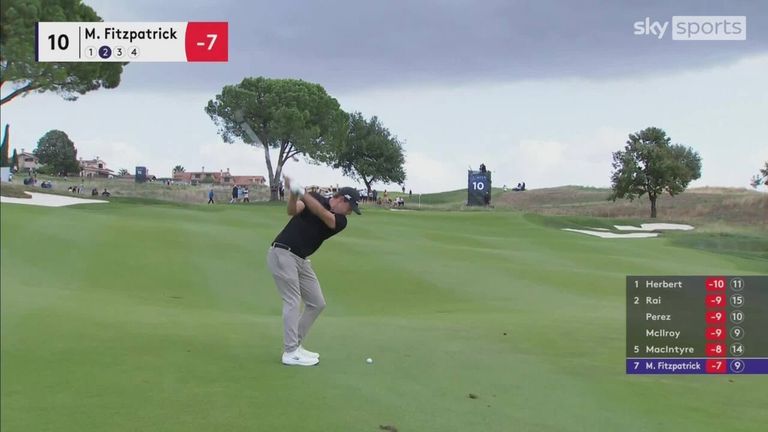 Matt Fitzpatrick heads into the final round of the DS Automobiles Italian Open with a one-shot lead but has Rory McIlroy and Aaron Rai breathing down his neck.

US Open champion Fitzpatrick coped brilliantly with the blustery conditions at Marco Simone Golf and Country Club on Saturday and closed his third-round 69 with a birdie to lead on his own.

World No 2 McIlroy and Englishman Rai sit one shot behind Fitzpatrick in a tie for second on nine under after contrasting rounds.

Halfway leader McIlroy mixed three birdies with three bogeys in his 71, which he finished with a five-foot birdie putt on the 18th.

Rai, meanwhile, fired two eagles and two birdies in a flawless 65 to make a huge move up the leaderboard.

Fitzpatrick, who bounced back from a front-nine bogey with birdies at the 10th, 12th and 18th, admitted it would be special to get his hands on the trophy.

He said: "It would mean the world. I love coming to play the Italian Open.

"I love the country. I love playing golf here. The fans are fantastic and to win tomorrow would be a great feeling."

McIlroy, who like Fitzpatrick will be hoping to represent Europe when the Ryder Cup is hosted at this venue next year, knows he faces a tough task on Sunday.

He said: "I think national opens are pretty important things in our game. I've been quite fortunate that I've won a few of them.

"This would be another great one to add to the list. So big incentive tomorrow to go out and play well.

"I know it will be a tough day. Fitzpatrick is very solid. These are the sort of conditions that he relishes. He's going to be tough to beat."

Rai was pleased with his day's work, saying: "I hit a lot of fairways, which is key this week. Hit a lot of good iron shots and made some key putts as well today.

"Putts around the turn, seven and eight for par, and made eagle on the ninth and 12th, and that helps keep the round going. I played very nicely overall."

France's Victor Perez, American Kurt Kitayama and Australian Lucas Herbert were in a three-way tie for fourth on eight under.