The victory is the second DP World Tour success in Robert MacIntyre's career to date, and denies Matt Fitzpatrick a second tour win of the season; Fitzpatrick became US Open champion this year back in June; both players finished on 14 under before play-off down the 18th hole 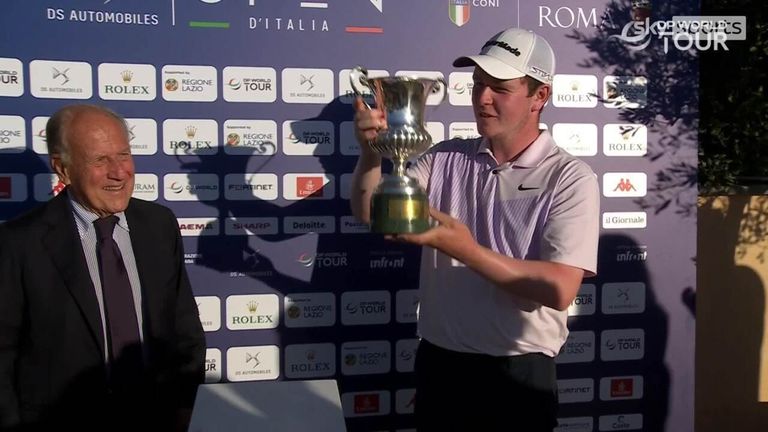 A monumental 10 birdies in a final round of 64 saw MacIntyre post a score of 14 under, before US Open champion Fitzpatrick birdied the 18th to force a play-off.

The Englishman could only par the first play-off hole, however, after a poor tee shot, while MacIntyre birdied the hole to secure the win.

The victory is the second DP World Tour success in MacIntyre's career to date, and denies Fitzpatrick a second tour win of the season.

The victory is also MacIntyre's first in 48 events, with the Scot aiming for 2023 Ryder Cup selection at the same venue - the Marco Simone Golf and Country Club in Guidonia Montecelio near Rome - when the tournament takes place in a year's time.

Rory McIlroy finished two shots back in fourth place at 12 under, while France's Victor Perez was a shot off MacIntyre and Fitzpatrick at 13 under, missing a birdie chance on the 18th to be part of the play-off.

"This means everything," MacIntyre told Sky Sports after securing victory.

"But we spoke to the right people, started working with (coach) Simon Shanks.

"There's so much work gone into this Mike (Thomson) my caddie, family, friends, everyone.

"I hit a terrible shot on 15 and thought it was backs against the wall.

"But we dug in. I've got a dogged attitude, I never give up and if I get punched, I punch back."

Of his hopes for Ryder Cup selection, MacIntyre added: "It's my main goal. My only goal for the next year really.

"I've done it on this golf course. But I didn't feel this week was going to be the one, the style of course, and the way I was playing.

"We worked on a few things Tuesday and Wednesday and I felt so in control of my game this week. My approach play has just gone up a notch."