Dan Bradbury finished three strokes ahead of Sami Valimaki at the Joburg Open to win his maiden DP World Tour title; the victory also means he has secured a place at The Open next year 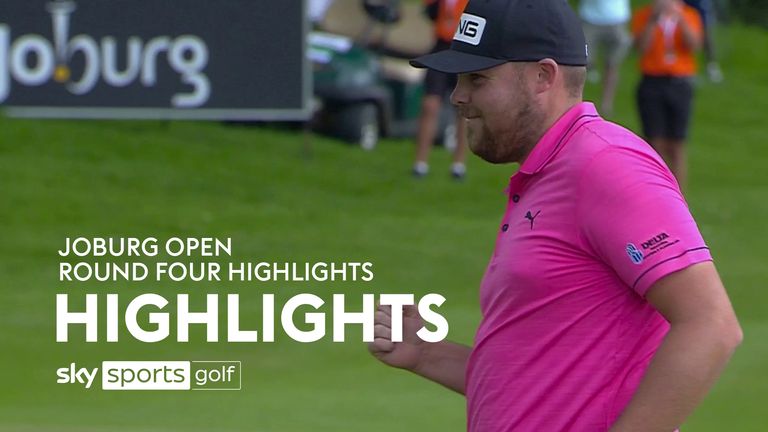 Englishman Dan Bradbury has won his maiden DP World Tour title after carding a four-under 67 in the final round at the Joburg Open.

Bradbury, who turned professional in July, went into the final round with a slender one-shot lead but held his nerve to win by three shots overall, despite a bogey on the 18th hole at the Houghton Golf Club.

With his mother watching on, the 23-year-old hit three birdies on the front nine - at the first, third and ninth - to edge ahead of the chasing pack in his bid to secure a wire-to-wire victory.

Bradbury, who also crucially chipped in for par at the sixth, added further birdies at the 13th and 16th on the back nine before his late slip, but comfortably maintained his lead ahead of Sami Valimaki, who closed with a two-under 69.

The Finn started one behind Bradbury but struggled to make inroads as he mixed a bogey with two birdies on the front nine and he also slipped up at the last following birdies at the 14th and 15th, holing a monster putt at the latter hole.

Yorkshireman Bradbury, playing this week on a sponsor's invite, finished on 21-under 263 following previous scores of 63, 66 and 67 in just his third DP World Tour event.

He leaves Johannesburg with a two-year exemption on the DP World Tour and £136,465 winner's cheque, as well as a place at The Open next year.

Bradbury said: "It won't sink in for a few days, I don't think. It's just a lot of pressure taken off your back - that's nice.

"I just enjoyed it, a lot of good golf, it was just a great week all round. Just drawing on experiences from college golf, just played solid golf, didn't try and do anything I couldn't do."

Asked what it meant to get an invitation to the Joburg Open, Bradbury said: "It means the world, I wouldn't be stood here without it. I wouldn't have anywhere to play this year without it. It's been life changing. Hopefully I make the most of it.

"I wasn't as bad [with nerves] as I thought I was going to be. Before the round, I was a little bit worse. Once we got going and started nice, it settled the nerves."

Valimaki had the consolation of also earning a spot at The Open at Royal Liverpool next year, while Bezuidenhout took the third place on offer as a result of having a higher world ranking than Van Tonder.