Brooks Koepka - who pulled out of the Tour Championship earlier this month with a wrist injury - told the rules officials "If I break my wrist it's on both you" after being refused relief; Koepka and Daniel Berger lose foursomes match 3&1 against Sergio Garcia and Jon Rahm 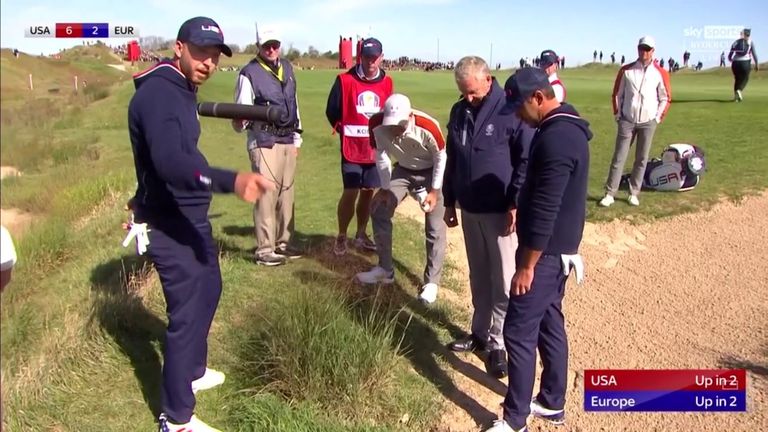 Brooks Koepka swore in the direction of rules officials after he was not granted free relief from an awkward lie during Saturday’s foursomes session at the Ryder Cup.

The four-time major winner was faced with a challenging second shot from near a bunker to the right of the fairway at the par-four 15th after an errant tee shot from playing partner Daniel Berger.

Koepka, who was a pre-event injury doubt with a wrist injury, insisted his downswing would be impeded by a nearby drain but, despite getting a second opinion and subsequent further discussions, he was forced to play the ball as he found it.

"If I break my wrist, it's on the ******* both of you," the American said, pointing at each official, as he finally agreed to play.

According to Rule 16.1, free relief is allowed when an abnormal course condition, including immovable obstructions such as a drain, physically interferes with the player's area of intended stance or area of intended swing.

Following the protestations, Koepka hit an excellent approach shot to the green as he and Berger combined to make a two-putt par to halve the hole in their match against Spanish duo Sergio Garcia and Jon Rahm at Whistling Straits.

However, it was the European pairing who sealed a 3&1 victory at the 17th green to record their second point together and reduce the deficit in the contest against USA.

Asked for his thoughts on the ruling after the match, Koepka said: "Yeah, we didn't get it."