"That is one of the most outstanding tee shots I have ever witnessed in my life," said Andrew Coltart on commentary after watching Bryson DeChambeau's effort at the fifth; watch the Ryder Cup live on Sky Sports Ryder Cup 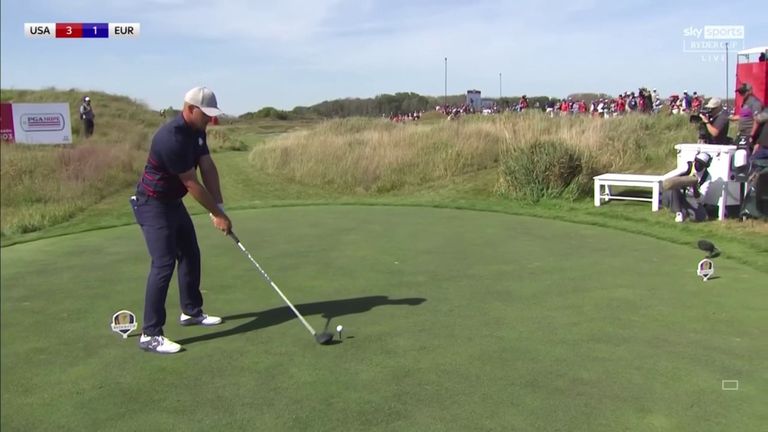 Bryson DeChambeau made a sensational eagle after smashing a 417-yard drive during the Friday afternoon fourballs at the Ryder Cup.

After sitting out the morning foursomes, DeChambeau burst into the spotlight at the 581-yard, par-five fifth at Whistling Straits.

The hole weaves its way from left to right and then left again between two lakes, but DeChambeau opted to take the direct route by going straight at the green with an aggressive line.

His monster drive cleared the first stretch of water and a host of bunkers before landing safely on the fairway, just 72 yards from the hole.

"That is one of the most outstanding tee shots I have ever witnessed in my life," said Andrew Coltart on commentary for Sky Sports.

A neat flick of the wedge with his second shot then left DeChambeau just three feet right of the pin.

"He's got the brawn but he's also got the touch. Simply sensational from Bryson DeChambeau. You just can't compete against that," said Nick Dougherty.

Dame Laura Davies added: "That was almost as impressive as the drive because that was a really difficult shot. It looked easy, but it wasn't because of the conditions, because of the wind. A fantastic shot."

DeChambeau subsequently tapped in for his eagle-three which put him and his USA partner Scottie Scheffler back to all-square with European duo Tyrrell Hatton and Jon Rahm, who had applied some pressure by holing a lengthy birdie putt.

The match finished tied in the end and DeChambeau said afterwards about the fifth: "Well, I knew if it was a little downwind, I could take a unique line, and I luckily was able to have that wind today. It was 20-plus, and I said to myself, all right, I have to aim at the green, so I did. So I just aimed at the green and bombs away.

"I had close to 200-mile-an-hour ball speed today warming up on the range, which is nice to see. My body is finally starting to get comfortable and heal from all the speed training stuff."

Click play on the video above to see DeChambeau's power hitting at the fifth...