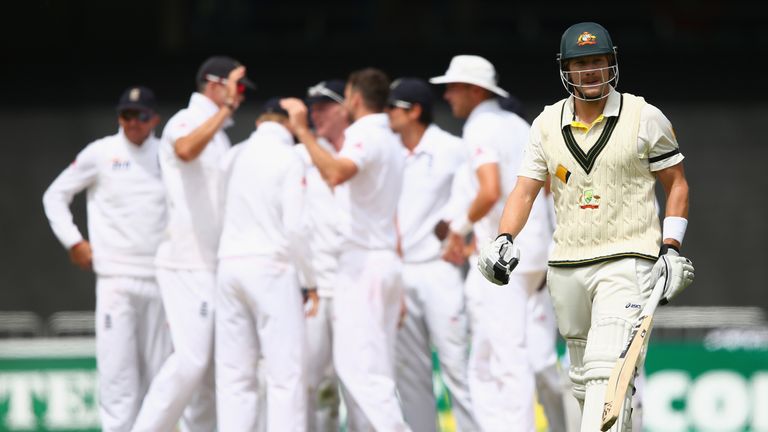 England failed to take their chance to turn the screw on day one of the second Test against Australia in Adelaide.

Losing the toss looked like it could have been crucial, particularly as Chris Rogers and Shane Watson put on 121 for the second wicket on a pitch offering little assistance to bowlers.

However the England attack - bolstered by the inclusion of all-rounder Ben Stokes and Monty Panesar - kept chipping away at the Australian innings to put themselves in a strong position.

The tourists, though, were left to rue three dropped chances in the evening session as Michael Clarke (48no) saw Australia reach 273-5 at stumps.

George Bailey was put down by Panesar off his own bowling while Joe Root just could not cling on to a diving effort at mid-wicket after Clarke had come down the wicket to Graeme Swann. Then, to rub salt into the wounds, Michael Carberry dropped a dolly to remove Brad Haddin off Panesar.

The wickets would have been just reward for England's efforts on an Adelaide wicket that definitely appears to favour the batsmen.

"We have got a good tail, though, so hopefully we can push on and I think 400 would be a good score."

Australia came storming out of the blocks during a morning session featuring three showers and just 14.2 overs.

David Warner set the tone, but the opener was the only wicket to fall during the session when the New South Wales left-hander, fresh from his century in the first Test, was caught at backward point off Stuart Broad after a quickfire 29.

That brought Rogers and Watson together at 34-1 and they looked in good order during a partnership spanning 44 overs.

However, three quick wickets before the tea interval appeared to turn the game in England's favour.

Watson (51) was caught-and-bowled by James Anderson driving a ball that was not full enough, while Rogers followed four balls later after for 72 after poking an edge behind off Swann.

That gave England an opening, bringing Smith out to join his skipper Clarke with the score on 155-3 and neither having faced a ball.

Smith made it through to the last over before tea, but no further, as Panesar produced a beauty to turn past his crooked defensive stroke.

England looked to press home their advantage - and on another day they could have had the hosts six down. However Panesar and Root fluffed their lines.

Panesar's was the far easier chance, while Root was at full stretch trying to hold on.

Clarke also survived a reviewed run out shout, while Bailey certainly had some nervy moments - particularly against Swann.

However once set, the duo looked to make England pay - with Bailey sending the new ball over the ropes to bring up his maiden Test half-century off 78 balls.

England refused to panic and the 83-run stand for the fifth wicket was finally brought to an end when Swann took a brilliant catch after Bailey mistimed his attempted hook off Broad.

Haddin then survived a good shout for leg before off Broad - with the DRS supporting the original not out decision - while he was then dropped by Carberry off Panesar.

Clarke, though, saw off an extra over at the death to remain unbeaten on 48.