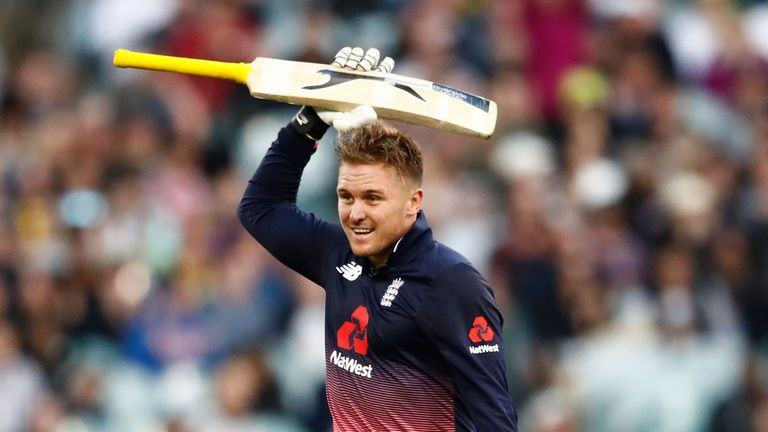 Jason Roy thrashed 180 from 151 balls, the highest score by an Englishman in ODIs, as England completed a record run chase at the MCG to earn a five-wicket win over Australia and draw first blood in the five-match series.

The opener's innings, which contained 16 fours and five sixes, saw him surpass Alex Hales' 171 against Pakistan at Trent Bridge in 2016 and ensured England topped Australia's 304-8 - beating the Melbourne record of 297-4 Australia amassed while defeating England in 2011 - with seven balls remaining.

Roy coasted to a fourth England century and overtook his previous best ODI knock, the 162 he hit against Sri Lanka at The Oval two years ago, having successfully overturned an lbw dismissal on 91 with Adam Zampa's ball shown to have struck him outside the line of off-stump.

The 27-year-old shared an England-record third-wicket stand of 221 with Joe Root (91no off 110) - Root looking completely over the gastroenteritis that had blighted him on day five of the fifth Ashes Test in Sydney a week ago - before he was caught at deep backward square with 24 runs required. 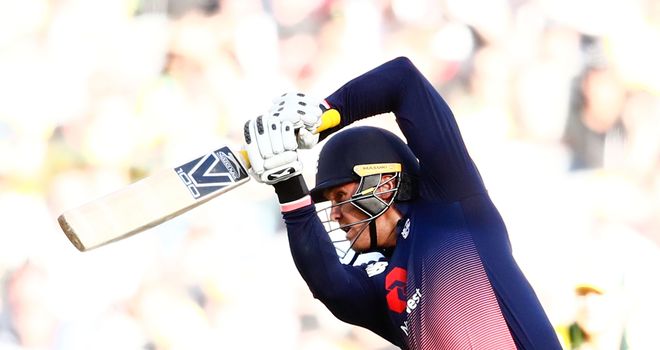 Aaron Finch (107 off 119) earlier completed his fourth ODI century against England - only Ricky Ponting and Mahela Jayawardene, with five, have more - and ninth in total after Australia were put into bat by Eoin Morgan.

Liam Plunkett (3-71), the fourth-highest wicket-taker in ODIs last year, began 2018 with three scalps, while Moeen Ali (1-39) put his Ashes struggles behind him somewhat with an economical 10 overs, in which he had Finch caught by Jonny Bairstow at deep midwicket.

Bairstow (14) and Hales (4), the latter back in the side at No 3, were early casualties in England's run chase but Roy, Root and Ali's match-winning boundary helped the tourists beat Australia for the first time this winter having lost the Ashes series 4-0 - their only slight concern coming when Roy jarred his wrist after slipping towards the end of his innings. 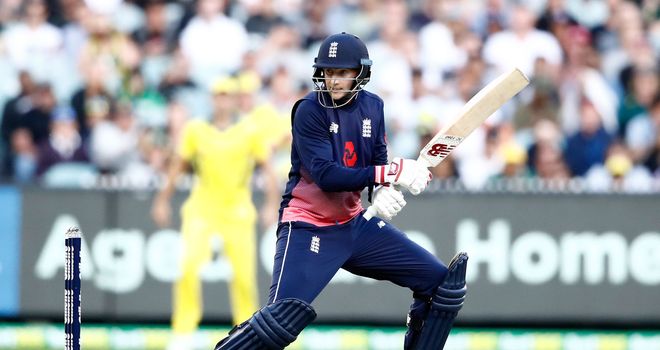 Joe Root supported Roy during a third-wicket stand of 221

PLAYERS OF THE DAY - Jason Roy and Aaron Finch

Roy had dropped out of the England side last summer following a series of low scores, with Bairstow and Hales the preferred opening pairing during the first three ODIs against Windies in September.

However, Hales' suspension following that much-documented night in Bristol offered Roy a way back in - the Surrey star responded with innings of 84 and 96 but bettered those efforts on Sunday, lashing a 32-ball fifty, 92-ball ton and reaching 150 from 126 deliveries.

Roy had plenty of streaky moments, top-edging over the wicketkeeper's head for six early on and becoming particularly frenetic as he approached his hundred, but had Australia scampering as rotated the strike and racked up the boundaries, principally on the leg-side - Roy even rolling out his version of Nat Sciver's Nat-meg. 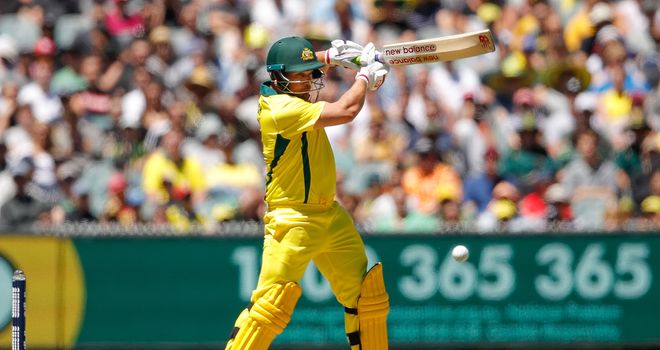 Finch's knock was ultimately overshadowed, though the 31-year-old played with tremendous authority as he scored his third MCG ton against England, just under three years after his second, a total of 135 in the sides' opening game at the 2015 World Cup as Australia hammered their rivals by 111 runs.

Finch - who sealed a 112-ball century with the third of his sixes, off Rashid and over long-on - shared a stand of 118 with Marsh for the fourth wicket, with his departure in the 36th over and Marsh's two overs later preventing Australia getting somewhere nearer 350.

It was left to some late-innings punch from Stoinis, who dominated an 85-run tandem with Tim Paine (27), to get them to an ultimately inferior 304. 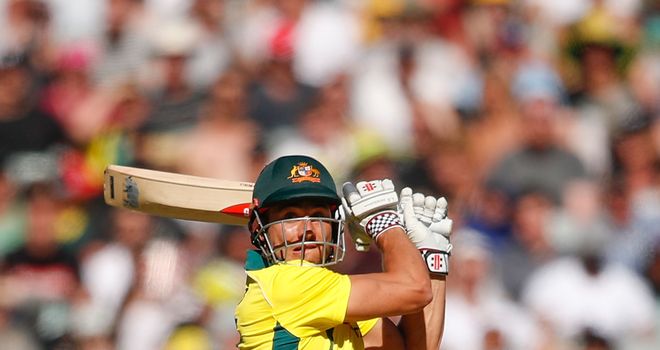 MOMENT OF THE DAY - Wood getting Warner

Wood displayed the pace England so sorely lacked during their Ashes hammering, notably with his fifth ball of the match when he dismissed Australia dangerman Warner.

Warner failed to deal with an 88mph bouncer and could only balloon the ball to Root at slip - it was Wood's only wicket but he bowled with speed throughout, something England will be looking to see in this series and in the Tests in New Zealand in March. 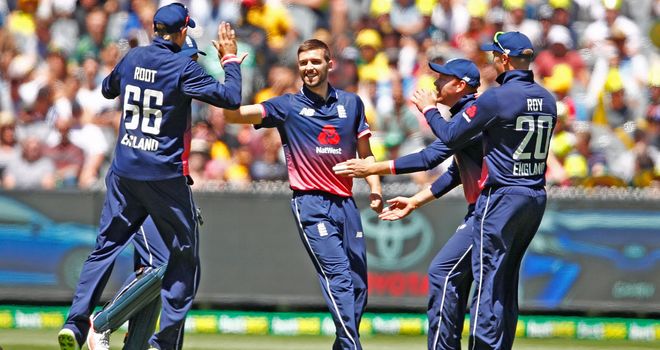 The pacey Mark Wood celebrates the wicket of David Warner

There was a nice moment before play when Jos Buttler was handed his 100th ODI cap by James Anderson, but Roy and Root's innings meant he had little to do with the bat, dismissed for a 10-ball four having strode to the wicket at No 6 after Morgan (1) picked out point.

Man of the Match, JASON ROY:
"Halesy wasn't too happy that I went past him by the sounds of things! It is incredibly special - I don't really have too many words right now. It was a huge honour to be out there for England again and get a few runs on the board after a tough season last year. Hopefully that was just a little blip. My hand is okay and I've heard it is a pretty nice track in Brisbane!"

England captain, EOIN MORGAN:
"I thought it was incredible from Jason - when he scores runs he is quite imposing at the crease and I thought that was no different today. He finished a tough summer incredibly well and what a way to start this series! It shows the character of the bloke.

"It was a tough decision to leave him out but we always knew he was part of our plans. Moving Root to No 4 was a big decision but it was profitable today. Our batting line-up looks quite long, which is nice." Eoin Morgan on Jason Roy: 'I thought it was incredible - when he scores runs he is quite imposing at the crease.'

Australia captain, STEVE SMITH:
"That was some innings from Roy, he played spectacularly well. He chanced his arm and it came off and he was supported really well by Root. We probably left ourselves a few short in the first innings, we lost a few wickets in the middle and that probably stopped us from going as hard as we would have liked at the back end.

"We then didn't start well with the ball, they got off to an absolute flyer. We tried to peg them back and take wickets but it wasn't to be. We need to start playing better cricket and get a few wins in this format."

The second game of the five-match series takes place in Brisbane on Friday, with the third then held at Sydney next Sunday. The series will conclude with games in Adelaide (Friday, January 26) and at the Perth Stadium (Sunday, January 28).