Watch the pick of the action as Kings XI Punjab beat Delhi Daredevils to regain top spot on the IPL.

Liam Plunkett's three wickets on IPL debut came in a losing cause as Delhi Daredevils slipped to a last-ball, four-run defeat to high-flying Kings XI Punjab in their first home game of the campaign.

England seamer Plunkett (3-17) had KL Rahul - who nailed an IPL-record 14-ball fifty in the reverse fixture in Mohali - caught at short fine leg in his first over, before knocking out Mayank Agarwal's off-stump in his second and having Karun Nair caught in the deep in his third as Kings XI posted 143-8.

Shreyas Iyer (57 off 45) kept his head as wickets tumbled around him in the run chase but, with five needed from Mujeeb Ur Rahman's final delivery, the Delhi batsman could only pick out Aaron Finch at long-off as Gautam Gambhir's rock-bottom Daredevils lost for the fifth time in six.

Kings XI's fifth win in six games and fourth in a row has seen them usurp Chennai Super Kings at the top of the standings - this victory achieved without Chris Gayle, who was rested despite smashing 63, an unbeaten 104 and 62 not out in his previous three innings for the franchise.

Delhi would have felt confident at the halfway stage, with Plunkett and Australian all-rounder Dan Christian (1-17) leading an excellent effort by a much-altered attack, the Daredevils having made five changes from Saturday's reverse at Royal Challengers Bangalore.

Nair top-scored for the visitors with a relatively sedate 32 from 34 balls, while David Miller (26 off 19) only did mild damage after being dropped on six by former Kings XI team-mate Glenn Maxwell at cover and IPL debutant Prithvi Shaw at point on 10. 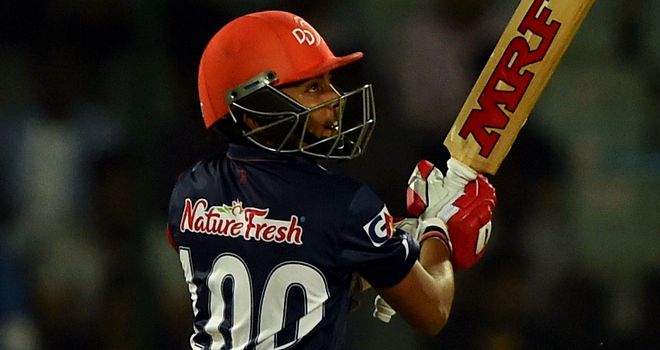 Rajpoot, Mujeeb (2-25), Andrew Tye (2-25) and Kings XI skipper Ravichandran Ashwin (0-19) bowled economically throughout the run chase - Barinder Sran (1-45), who dismissed Plunkett for a golden duck, the only member of the attack to receive some tap.

Shreyas kept Delhi in with a sniff, however, but 17 from the 20th over proved too tall a task, despite the 23-year-old biffing Afghanistan spinner Mujeeb for six from the second ball and four from the fifth.